In organising a swift coup against Aung San Suu Kyi (ASSK), Myanmar’s generals have killed the illusion, already in its death throes, of the liberalisation of Myanmar under US domination.

On Sunday (31st January) Aung San Suu Kyi, the ‘State Counselor’ of Myanmar, leading ministers and leaders of ASSK’s party the National League for Democracy (NLD) were arrested. Following this, the coup was announced by U Myint Swe, the military-appointed Vice-President of Suu Kyi’s government, who has declared a state of emergency for a year, at which point he promises new elections will be held.

All powers have been transferred to the military as provided for in the constitution they themselves wrote in 2008, which was designed to facilitate just such a coup. The internet was cut off and later restored, while mobile phone services remain cut off. Crucially the newly elected MPs, predominantly from ASSK’s party, have been prevented from meeting in what was (not coincidentally) due to be the first day of the new parliament.

What is behind this coup? Surely the military had no need for it? They drafted the 2008 constitution that enabled ASSK to come to (limited) power in 2011, a process they engineered to win greater investment from the West and to secure their position, rather than end up overthrown in a US-backed ‘colour revolution’. This constitution guaranteed their role, and it seemed to work. In fact, it worked so well that ASSK’s democratic halo slipped in the eyes of the West, actively supporting as she did their genocidal campaign against the Rohingyas, to the point she defended them in the Hague in 2019. She very much associated herself with them, presenting an image of ‘national unity’, and even had journalists reporting on the massacres arrested. At a lecture in Singapore, she said her relationship with the military was ‘not so bad’.

So, why the coup, which could backfire so badly? For the same reasons that any bureaucrat must eliminate any understudy who performs too well. No matter how much she dutifully served her former jailors, she could never win their trust, because she was overwhelmingly more popular and legitimate than they, being seen as the mother of the nation who, everyone knows, was wrongfully oppressed by the very people still in charge. This was a fundamentally unstable alliance.

The rules and regulations set up in the compromise between ASSK and the military meant that there was actually very little room for ASSK and her party to make any constitutional changes. However, their fears were clearly not completely baseless. In March last year, ASSK’s party proposed a constitutional amendment to allow her to become President, something the military clearly could not tolerate since they designed the new constitution specifically so that she could never be president (it states no one can be president if their children are foreign nationals, as hers are). This amendment, however, was rejected thanks to the constitutional privileges afforded the military. 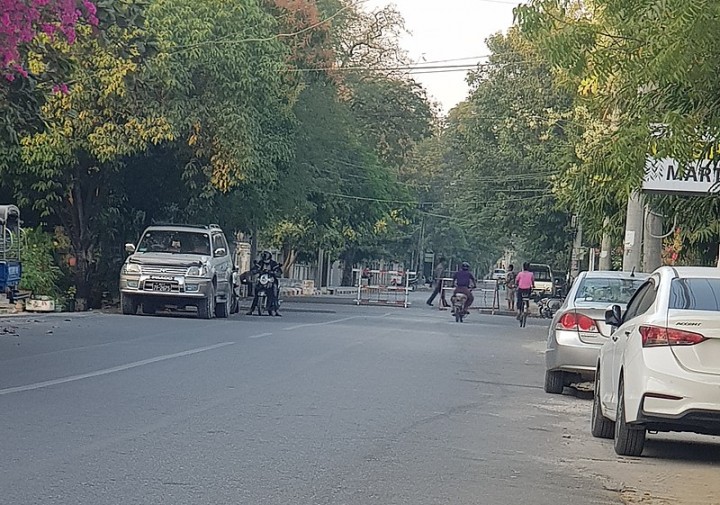 Moving the amendment last year also appears to be something of a tactical blunder, because only a few months later, in November, a general election was planned. In this election, ASSK and her party won an even bigger landslide than last time. This could have been the point to push for her long desired constitutional change, and no doubt the military understood the danger. Her victory underscored the unsustainability of this alliance. She was growing more powerful, and they had to put a stop to this before it was too late.

Ever since that election they have complained of alleged fraud to explain her crushing victory. They demanded the government “abolish the Union Election Commission; that it recount all votes cast in the Nov. 8 election with the military’s assistance; and that it postpone the opening of the new Parliament.” (The Irrawaddy, 29 January 2021)

The last point is very telling, as is the date of the coup, which exactly coincides with the opening of the new parliament. Clearly, they wanted to prevent it pushing through any constitutional changes that could curtail their power and privileges.

This process has destroyed the utopia of the managed transition to bourgeois democracy in Myanmar. Ten years ago, the transformation in Myanmar was a shining light in an increasingly dark world for the Western imperialists, apparent proof that the future still lay with US-dominated liberal democracy and free trade (on US terms). The following years have, bit by bit, disabused people of this illusion, and Sunday's events are literally the illusion’s coup de grace.

Some are asking if China is behind the coup. This seems unlikely, because the regime, including ASSK, had made it clear they were very much in China’s camp. A year ago, Xi Jinping met with ASSK in Naypyidaw and signed 33 agreements related to infrastructure, trade and manufacturing. It is a fully paid-up member of China’s Belt and Road initiative. Only a few weeks ago ASSK’s government met with China’s foreign minister Wang Yi, who promised China’s support for the regime regarding the Rohingyas, as well as 300,000 doses of Chinese coronavirus vaccines. In return, Win Myint, the then President (now deposed) and member of ASSK’s party, promised that Myanmar will continue to support China's position on issues related to Taiwan, Tibet and Xinjiang.

Most importantly, at this meeting, it was agreed to proceed with the long-planned deep-sea port in Rakhine State (site of the genocide against the Rohingyas), along with the associated ‘Special Economic Zone’. This will crucially allow Chinese trade to bypass the US Navy controlled Strait of Malacca around Malaysia, significantly weakening US imperialism’s influence in the region.

So, it seems unlikely China orchestrated the coup, which could seriously destabilise what was already an ally giving it what it wanted. Nevertheless, there is no doubt that the new regime, shorn of ASSK, will be even more pro-China than before (should the coup stick, which is far from guaranteed). This is clear in the contrast between the statements from the US and China after the coup. The US, and all Western powers, have condemned it, but China has merely ‘noted’ the coup, not wishing to alienate the new regime, but also wanting to reopen its account with ASSK should she come back to power.

As Daniel Russell, Obama’s top diplomat to East Asia, stated, “This is a huge setback – not only for democracy in Myanmar, but for US interests. It’s yet another reminder that the extended absence of credible and steady US engagement in the region has emboldened anti-democratic forces.” (The Guardian, 1st February 2021)

As Trotsky long ago explained, there is no progressive bourgeoisie, because they are united in their desire to maintain capitalism, with all its exploitation and poverty. In her own words, ASSK explained that she never wanted a revolution that could sweep away the old regime, “We do not want to encourage the kind of revolutions that [could] turn our country upside down. We will be patient but we will be persistent.”

It is safe to say her patience has not paid off. As we wrote last year, she thinks that “by doing the junta a favour, they will hopefully grant her the (minimal) democratic reforms she wants. But it is crystal clear that they will never grant democratic reforms that truly threaten their power and privilege, thus this liberal path reveals itself as nothing but complicity in the efforts of the ruling class to deceive the masses. The only way to remove the junta from power is precisely through such a revolution that will ‘turn the country upside down’."

The cravenness of the liberal approach lies in the above-quoted fear of revolution, fear of the masses. ASSK and her party are bourgeois liberals, and as such, want only to gradually reform the regime so that the ‘free market’ may penetrate more deeply. This same attitude can be seen even in this moment, as NLD spokesperson Myo Nyunt stated in response to the coup that “I want to tell our people not to respond rashly and I want them to act according to the law” - the sacred law that was drafted by the military junta precisely so they can easily organise coups like this!

Nevertheless, we cannot discount the possibility that ASSK will encourage a sort of mass movement or uprising against the coup, given her own freedom is at stake. It is for that reason that she has now put out a statement calling for protests and resistance against the coup.

The hatred towards the military among the wider masses is evident and the popularity of ASSK is still prevalent among the people, as the November elections demonstrated. At the moment, the more advanced workers’ unions, the militant student unions and a few radical forces are trying to mobilise for the anti-military movement. There is, for example, a healthcare workers' movement in defiance of the military coup. The healthcare workers are very tired, especially with the impact on them of the pandemic.

In these conditions, a protest movement called from the top by ASSK could develop a life of its own and would always tend to go far beyond her own cautious and capitalist agenda. Already, among the youth there is a growing radicalisation that goes beyond ASSK. This is also reflected at the present moment with some who are proposing Min Ko Naing, the former student leader during the 1988 uprising, as a new rallying point. The idea that there is no “supreme saviour” is also becoming popular among the youth.

The military leaders may have made a serious miscalculation here, and as they mobilised and openly sponsored the lumpen and far-right elements, including the monks, to demonstrate in support of the coup, their action could be the proverbial “whip of the counter-revolution” that serves only to enrage and push forward the masses.

It is highly likely therefore that mass protests will take place, given ASSK’s popularity and the military’s unpopularity and lack of legitimacy. But such protests will involve the masses, by definition. That is, millions of poor and oppressed people, workers and peasants, who have no interest in furthering capitalism. What is clear is that Myanmar will have no smooth, managed transition to bourgeois democracy. Its future is one of mass struggle and turbulence. The masses of Myanmar must look only to themselves and to the ideas of socialism for a real way out of the crisis.

The traditional left in Myanmar, due to the heavy hangover of Stalinism, is bogged down in the idea that there exists some kind of progressive wing of the ruling class of Myanmar, and that the role of the mass movement is to defend that wing against the more openly reactionary wing. This idea holds back the left in Myanmar from presenting a genuine independent voice, a true voice of the workers and peasants. What is required is an independent mass party of the working people.

The Marxists oppose the military coup, and they defend all democratic rights, but they also explain that in the long run such rights can be easily destroyed, as the present ongoing coup clearly demonstrates. The only way of guaranteeing a real end to the threat of continued military rule is to do away with the system that breeds it, the rule of the privileged elite, the rule of the capitalists and landlords, and replace it with a system where the workers decide. That is something that is worth fighting for in Myanmar.

Some of the information in this article was provided by sympathisers in Myanmar.