At a mass rally in Soweto on April 30th the Economic Freedom Fighters launched their manifesto for the August 3rd local government elections. This was a big event with a sea of red filling Orlando Stadium. For the working class people, the students and the poor who were in attendance, it was an opportunity to listen to Malema’s speech, in which he made the manifesto public.

Details
In Defence of Marxism
Created: 16 May 2016

The crisis of capitalism today is leading more and more people to question the society that we live in. There is a widespread sense that something is fundamentally wrong in the world and that it must be changed fundamentally. According to the ruling class and reformists the events taking place today are merely the result of a series of unfortunate accidents and all that is needed is for everyone to act “rationally”. But this does not explain anything and it solves even less. 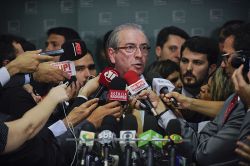 The Brazilian Senate has just voted by a majority of 55 votes to 22 to impeach the President Dilma Rousseff. Michel Temer, the Vice-President, and member of the bourgeois PMDB, is now making preparations to form a new right-wing government. This marks the end of a long period of relative political stability in Brazil. The economy is in its worst recession since the 1930s. It is in this context that we can understand the recent dramatic shifts and turns in the political situation.

"The year 1848 is turning out well", wrote Engels. "By this glorious revolution the French proletariat has again placed itself at the head of the European movement. All honour to the workers of Paris!" That revolution spread across the whole of Europe, marking an important development in the class struggle.

The Economic Freedom Fighters (EFF) threw down the gauntlet to the rest of the their political rivals on Saturday at its mass rally to launch their manifesto for the 3 August local government elections.

When arguing the Nkandla case, President Jacob Zuma’s senior advocate, Jeremy Gauntlett, said that this was “a delicate time in a dangerous year, societally” and that the Nkandla saga has “traumatised the nation in many ways”- a profound statement which sums up the current state of mind of the ruling class.