One hundred years ago the Russian Revolution shook the capitalist world order to its foundations. Here for the first time ever, the Russian workers, led by Lenin and the Bolshevik party, took power into their own hands. The ruling classes have never forgiven this.

In spite of all the attempts to slander the revolution and its achievements, however, the ruling class cannot hide the fact that capitalism today is in a deep crisis. Everything that was taken for granted a few years ago, from the right to free education, to healthcare, jobs, pensions and decent wages, is no longer guaranteed by the system. The relative stability of the past is gone, with wars and civil wars flaring up in different parts of the world. Poverty is growing everywhere, while the concentration of wealth in the hands of the few has never been greater. The world is pregnant with revolution, and bourgeois politicians and commentators are coming to realise that their system is at risk.

There is no solution to the present crisis within the limited confines of the capitalist system. It is the system itself, the “market economy” that is the cause of the crisis. The only real lasting solution is to uproot the system once and for all and replace it with a rational planned economy, an economy run by and in the interests of the working people. That system is called socialism. 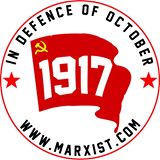 The only time in history that the working class managed to take power into its own hands – albeit for a few brief years - was in the 1917 October Revolution. This was because at its head stood the Bolshevik Party, a revolutionary Marxist workers’ party painstakingly built up by Lenin in the previous decades. That party showed what needs to be done to successfully carry out a workers’ revolution, a socialist revolution.

That is why the bourgeois ever since have piled a mountain of lies upon that historical event. Their task was facilitated by the Stalinist degeneration of the Soviet Union, something which did not flow from the nature of the Bolshevik party, as they claim, but which developed a s a consequence of the isolation of the revolution in one very backward country. That isolation was due to the defeats of many revolutions – from the German revolution in 1918, the Italian in 1920, the Chinese in 1926 and many others – that followed on from the Russian Revolution. Those defeats were not foregone conclusions, they were not inevitable, but were due to the betrayals and errors of the leaders of the labour movement in each country.

The bourgeois have no interest in historical truth. Their only interest is to hide the real meaning of the Russian Revolution from today’s generation of workers and youth that is struggling to find a way out of the present impasse. The lies go from the events of 1917, distorting what really happened, presenting the revolution as a “coup”, to conflating Bolshevism with Stalinism, claiming that one leads directly to the other.

The International Marxist Tendency is launching a campaign to commemorate the 100th anniversary of the Russian Revolution. This, however, is not just a remembrance; it is a gigantic task of answering the lies and slanders of the bourgeois and bringing out the truth, for the experience of the Russian Revolution is full of lessons that are not merely of historical interest but can be applied to today's’ situation.

Back in 1917 there was no lack of reformists who advised the working class not to take power, not to listen to the Bolsheviks, but to seek an accommodation with the so-called “democratic” or “progressive” elements within the capitalist class. They were justifying the capitalist system, just as today the labour and trade union leaders cling onto the coattails of the ruling class. Tony Blair, Francois Hollande and all the other leaders of the Social Democratic organisations, together with the leaders of the former Communist Parties, including leaders like Tsipras in Greece, are the true heirs of the reformists of 1917. They have spent their whole political careers in arguing that there can be no revolutionary change and that we must struggle only for what is “achievable”. The recent experience of Greece shows that what is “achievable” is austerity, austerity and more austerity.

The Bolsheviks in 1917 showed to the workers of the world that there is another road. A recent article in The Economist opened with the line, “The similarities to the world that produced the Russian revolution are too close for comfort…” Indeed they are! More and more bourgeois commentators are warning that unless something is done to alleviate the pain caused by the present crisis, then revolution will be the inevitable outcome. Opinion poll after opinion poll shows that a growing section of the population, in one country after another, sees revolution as the only way out.

We will be dedicating this year to bringing back to life the events of 1917, from the initial first steps of the working class, through all the subsequent events, the February revolution, the provisional government that followed, all the manoeuvres aimed at thwarting revolution and the final glorious days of October when the working class came to power.

We will be producing articles, books and videos; we will be holding meetings around the world dedicated to the memory of the October revolution and its relevance today. The battle over the truth of what happened in 1917 is not a mere quibbling over historical events. It is a living battle today, on the one side between the bourgeois and their representatives within the labour movement, the reformist leaders, and on the other side the workers and youth striving for an alternative to this rotten system.

Our task as Marxists is to tell the historical truth and build a force today capable of completing the task begun by the Bolsheviks, the socialist transformation of the world. Only then will we see an end to unemployment, poverty, wars and civil wars. Only thus can we avert the dangers facing humanity and the planet we live on, from climate change, to the widespread poisoning of the environment in the quest for profit. Only in this way can we defend the rights that generations of workers have fought for and which are now in danger of being destroyed.

That is what the International Marxist Tendency stands for and, if you agree, join us in the struggle for a better world, a socialist world!