When a seismic shift occurs in nature, all the accumulated pressure that had built up silently over a long period of apparent calm is suddenly released, instantly transforming the landscape. The reconfiguration of public opinion over socialism in the US has had a similar effect on the left—it has unleashed a debate that is pushing socialists to ask more interesting questions about what it will take to transform this society in our lifetime.

Amid the churn of ideas, perspectives, and attitudes, there is an urgent attempt to make sense of the present epoch, to separate what is possible from what is unrealistic, to take stock of what is new and what is fundamentally unchanged about the tasks that confront us.

The changed situation is fueling a polemic between revolutionary optimism and despairing pessimism. These contending attitudes reflect the dissonant clash between the vigour of the newly radicalised generation and the burnout of the old-guard activists who have been uprooted from the relative tranquillity of the “pre-seismic” political environment.

On one hand, there’s a sense that the historical tide is turning against capitalism, and socialists are beginning to swim with the stream. The growing angst of the ruling class over socialism’s popularity—and even over the very survival of the capitalist system—has become a frequent topic in the media. It has been a long time since we’ve “let the ruling classes tremble” like this, and yet, in place of the emboldened optimism you’d expect from the growing socialist left, the array of voices peddling cynicism and defeatism is surprising.

“Bleak is the new red” announces Salvage, a quarterly “written by and for the desolated left”—made up of veterans of the activist scene who have “earned their pessimism” and have left their former organisations, dejected and tired of being told the revolution was coming, only to be let down time and again. Lacking a balanced perspective as to how the class struggle was unfolding, some socialists found that their expectations did not sync with reality. Instead of giving up their schemas and adjusting their perspectives, they gave up hope altogether. Groupings like Salvage take comfort in styling themselves as “revolutionary pessimists”—as if there were something novel or revolutionary about adopting a glum outlook on history. Far from being a serious contribution to the strategic debate, this is just a particularly morose variation on an old theme.

Fortunately, the bleak outlook of the flotsam of the previous phase does not reflect the mood of the millions who are coming to socialist ideas today. But so-called “revolutionary pessimism” finds other, more subtle, exponents, which have managed to stake ground in the current debate on socialist strategy. One of these is Jacobin’s Vivek Chibber, whose article “Our Road to Power” pays tribute to the Leninist party organisation as the only model proven to be politically effective, and even concedes that, “Given that history, it’s hard to imagine a way for the left to organise itself as a real force without some variant of the structure the early socialists hit upon—a mass cadre-based party with a centralised leadership and internal coherence.”

However, after applauding the Bolsheviks for their tactical success in sinking roots among the working class, he passes from the topic of organisation to the realm of strategy, and the admonishing tone of the NYU professor comes out, assuring the reader that the October Revolution has less to offer us today on the question of strategy:

One might describe this as a strategy of a ruptural break with capitalism. Now there’s no doubt that the decades from the early twentieth century all the way to the Spanish Civil War could be described as a revolutionary period. It was an era in which the possibility of rupture could be seriously contemplated and a strategy built around it. There were lots of socialists who advocated for a more gradualist approach, but the revolutionaries who criticised them weren’t living in a dream world. The Russian road, as it were, was for many parties a viable one. But starting in the 1950s, openings for this kind of strategy narrowed. And today, it seems entirely hallucinatory to think about socialism through this lens.

The basic idea is that we’re living in a post-revolutionary era, in which traditional class struggle and insurrection are consigned to a remote past. To be a “realist” is to lower your head in despondence and accept the need for a “gradualist”—that is, reformist—strategy. But what is it about the present epoch that forces us to rule out the kind of revolution that the Bolsheviks achieved? The professor informs us:

Today, the state has infinitely greater legitimacy with the population than European states did a century ago. Further, its coercive power, its power of surveillance, and the ruling class’s internal cohesiveness give the social order a stability that is orders of magnitude greater than it had in 1917 . . . Today, the political stability of the state is a reality that the Left has to acknowledge.

This appraisal of our epoch is frankly baffling, at a time when the world’s governments are more discredited than ever, and anti-establishment sentiment is near universal. An EU-sponsored survey recently asked over half a million people ages 18 to 34 “Would you actively participate in large-scale uprising against the government in power if it happened in the next days or months?” Among Greek youth, 67 percent answered in the affirmative, as did 65 percent in Italy, 63 percent in Spain, 61 percent in France—hardly a testament to the state’s legitimacy with the youth, who represent the future battalions of the class struggle.

Equally puzzling is the claim of greater “internal cohesiveness” of the ruling class—at a time when the traditional liberal “centre” has all but collapsed, and extreme polarisation is the defining political feature of the global situation. In the US, the president himself is one of the primary destabilising factors. It seems not a week goes by without a new constitutional crisis or a high profile scandal that undermines the façade of legitimacy of the state institutions. The regime at the head of the most powerful capitalist country on earth could be characterised in many ways, but it is anything but “cohesive” or “stable”!

For millions of American workers and youth, the grotesque absurdity of having a racist billionaire in the White House is a modern picture of prerevolutionary decadence, at a time when inequality has reached almost unfathomable levels. As the anger and polarisation in society intensify, it is not the advocates of a revolutionary strategy who are living in a dream world. To imagine we are headed for a protracted period of capitalist growth and political stability, as during the postwar boom, and to urge the left to temper its ambitions accordingly—this is the hallucinatory position. 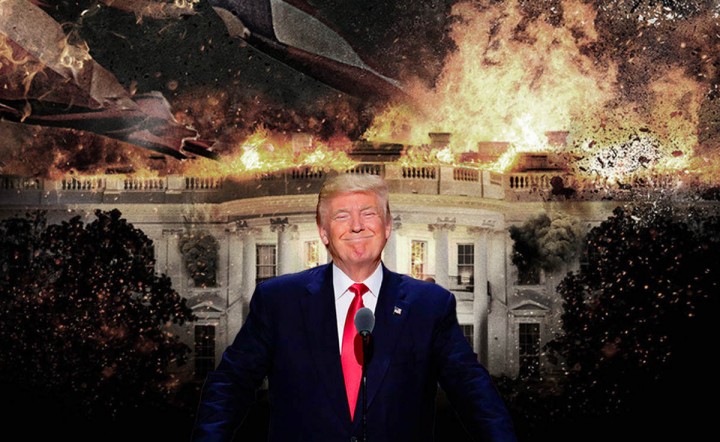 Revolutionary optimism has nothing to do with hoping against hope that the revolution is around every corner. It’s a broader historical vantage point that looks beyond the present moment and sees the factors that promise an intensification of the class struggle on the basis of the contradictions inherent within capitalism. The confident optimism of the bourgeoisie is a thing of the past. It had a material basis. For a time, the development of the productive forces enabled humanity to lift itself up and increase its mastery over nature. Today, the same class that oversaw that progress is now standing in its way, and this social impasse can only be broken by the revolutionary action of our class.

The capitalists are powerless to prevent a further onslaught on living standards and the environment. The revolutionary optimists are simply those who see the pressure building along a fault line that has long appeared dormant on the surface. As with the timing of an earthquake, the precise moment when the accumulated anger passes into a revolutionary explosion cannot be predetermined. But to rule it out altogether is like concluding that seismic activity along a particular fault line is a thing of the past—when it is a fact of life that no fault line remains dormant forever.

For those who can see that the historical pendulum promises an eventual resurgence of the labour movement, the strategic question is: what needs to be in place for a future revolution to succeed?

For this it is indispensable to return to the lessons of Bolshevism, as so many socialists are doing today. The heightened interest in Lenin’s organisational conception is a promising indicator of the left’s future trajectory.

So what is a cadre organisation? In its most general sense, a cadre is an organisational framework—the word means “frame” in French—consisting of seasoned personnel capable of rapidly forming and training an expanded organisation when conditions make this necessary or possible. The term is most commonly used in a military context to signify “a key group of officers and enlisted personnel necessary to establish and train a new military unit.” The parallels between war and revolution provide a useful illustration of the dynamic function of a cadre organisation.

The process of wartime mobilisation hinges on the ability of a ruling class to raise an army with maximum efficiency, and it is the role of the military cadre to take the influx of new recruits or conscripts and organise them into battle-ready detachments in the shortest possible space of time. The essential dynamic of the cadre organisation is its ability to systematically transmit a method or a body of expertise from an initially limited framework of personnel to an exponentially larger numerical force.

This transmission belt is the essential operation, and in order for the general staff to be qualified for this task, the officers are themselves required to pass through an extensive preparation in a military academy. In addition to a thorough training in military science, structure, and protocol, the curriculum at West Point is designed to provide military leaders with a well-rounded theoretical education that includes history, philosophy, economics, international relations, foreign language, and even psychology and literature.

The analogy highlights a central aspect of Lenin’s cadre organisation that is too often neglected in modern accounts of the legacy of Bolshevism. The October Revolution was made possible because the thousands of cadres in the party ranks had passed through two decades of training in the makeshift revolutionary academy of Bolshevism—hundreds of clandestine study circles and discussion groups that collectively imbued these individuals with the dynamic revolutionary worldview offered by Marxist theory. At the start of 1917, the Bolsheviks numbered 8,000—a drop in the bucket for a country of 185 million—but over the next eight months, that framework of professional revolutionaries grew more than thirty-fold, and won over virtually the entirety of the working class to its programme.

They succeeded in sinking roots in the class, and this constituted a crucial part of the cadres’ political education. On this point, we can absolutely agree with the base-builders—if socialists are not embedded in the working class, there can be no talk of winning the class to a socialist programme. Where Bolshevism diverges from today’s base-building projects is in the content of what is being embedded as well as how this is carried out. The scientific method of Marxism, and the ideas, perspectives, and programme that derive from it, are the genetic information that make the revolution possible—if and when they are transmitted en masse into the class struggle. The political education of the Marxist circles was never a cherry on top—it was the key factor that made October 1917 possible.

The winning of political and economic power by the American working class is absolutely possible in our epoch. What is needed is to train the cadres who can intervene in the intensifying class struggle and transmit a programme that transcends the limits of capitalism once and for all.