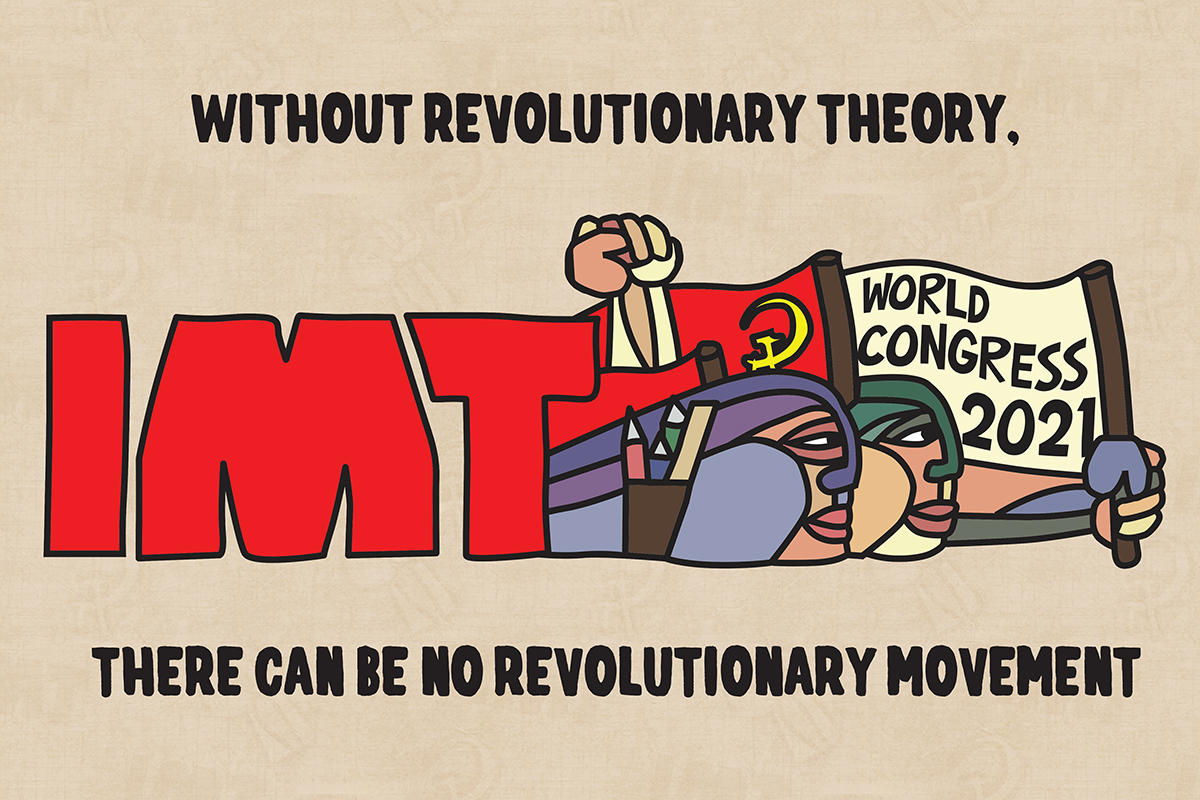 Between 24 and 27 July, more than 2,800 Marxists from over 50 countries around the world gathered online for the World Congress of the International Marxist Tendency (IMT). This congress had originally been scheduled to take place in 2020, but was cut across by the outbreak of the COVID-19 pandemic.

Although the pandemic rendered an in-person congress impossible, on account of being streamed online, thousands of comrades were able to participate in a congress of the IMT for the first time. The congress was brimming with enthusiasm and confidence. Running through the four days was a sense of being bound closely together as one united, international revolutionary organisation, despite the distances that separated us.

The contribution by comrade Kazeem, delegate for the Nigerian section of the IMT, was a particularly poignant moment. Racist visa regulations had prevented any Nigerian delegate from participating directly in a congress until this point. Now, for the first time, the whole International could listen with pride to a first-hand report of the marvellous work of our Nigerian comrades.

The event was a huge feat of organisation, with teams working hard behind the scenes to make sure everything went off without a hitch despite its scope. Particularly hard-working were teams of translators translating the whole congress into ten languages.

The result was a resounding success. Evidence of the mood of the congress was plastered all over social media under the congress hashtag, #IMTCongress21. Images streamed in from Edmonton in Canada to Karachi in Pakistan, from Leningrad in Russia to Manchester in Britain, of watch parties of comrades gathered on every continent and in every corner of the globe.

The world turned upside down

Anticipation for the congress was met with a rich, lively discussion on a high political level that cannot be found in any other organisation. 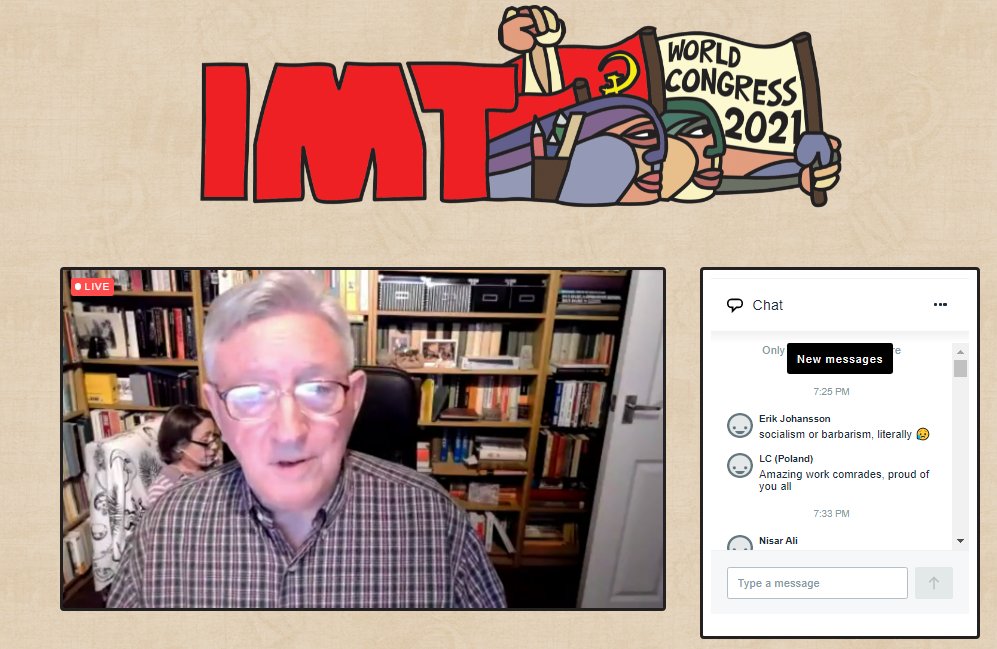 Alan Woods opened the an enriching discussion on World Perspectives by giving a panorama of the deep crisis through which capitalism is traversing / Image: @marxistjorge, Twitter

Alan Woods opened the congress by giving a panorama of the historic crisis – the world’s worst in 300 years – that has unfolded in the last year and a half. Although the coronavirus plague did not cause the crisis – which had been brewing for decades – nevertheless, the two are now indissolubly bound up together.

It is not the first time that the rottenness of a social system has been exposed by an unpredictable event like a pandemic. Quoting the lines of the ruling class’ own strategists, Alan showed how the bosses are quite aware of the reckoning that the crisis has in store for them. And yet, just like Marie Antoinette and the French aristocracy before the Great French Revolution, the capitalist class today continues to revel in its obscene opulence despite the unparalleled suffering of the mass of humanity.

Whilst the corpses of this pandemic’s victims go unburied on the streets of Indian cities, the world’s super rich have enjoyed a $5 trillion wealth surge since 2020.

And whilst Amazon workers collapse from exhaustion on the floors of Jeff Bezos’ warehouses, their boss is journeying to the edge of space to become the world’s first ‘space tourist’. As Alan explained, none of these obscenities will pass unnoticed. The pandemic has exposed the rottenness, corruption and incompetence of the ruling class, who are at a loss to end the nightmare. It has left a deep, fulminating anger brewing in the hearts of hundreds of millions of people.

But as Alan explained, only a revolution can sweep their system from the face of the Earth. And for that, a revolutionary party of the working class based upon the clear ideas of Marxism is needed.

A brewing mood of revolutionary anger

The ground for revolution has been thoroughly ploughed, and its seeds are already starting to burst forth. In 2019 we saw revolutionary developments in Ecuador, Chile, Iraq, Lebanon and elsewhere. And this year we have seen new developments in Chile; a historic National Strike in Colombia; the explosion of the anti-Bolsonaro movement in Brazil – which was ongoing at the time of the congress; the election of a trade union militant as president of Peru; an insurrectionary movement of the Indian farmers; an explosive movement against the generals in Myanmar; the capture of the leadership by the left in Britain’s biggest trade union, and many more portentous events.

These diverse events are all symptoms of the same process of revolutionary awakening. Given the mood of anger that exists in society, even a shaky and temporary recovery could give a big impetus to new industrial movements, which will shake up the labour movement.

Following Alan’s introduction, comrades gave reports on from across the world, and touched upon a range of questions flowing from the present crisis: from the defeat of US imperialism in Afghanistan, to the collapse of Scandanavian social democracy, to the role of the trade unions, and how Marxists can best defend the gains of the Cuban Revolution.

The congress enjoyed a wide-ranging and vibrant discussion on World Perspectives that elevated the sights of all comrades to the tasks of the epoch and the opportunities for building a Marxist tendency capable of intervening decisively in the course of these great events.

In defence of revolutionary theory

But to build a Marxist tendency that can strive for the leadership of the workers’ movement across the world we must build an organisation based upon clear ideas and thousands of disciplined Marxist cadres who have absorbed those ideas and methods. 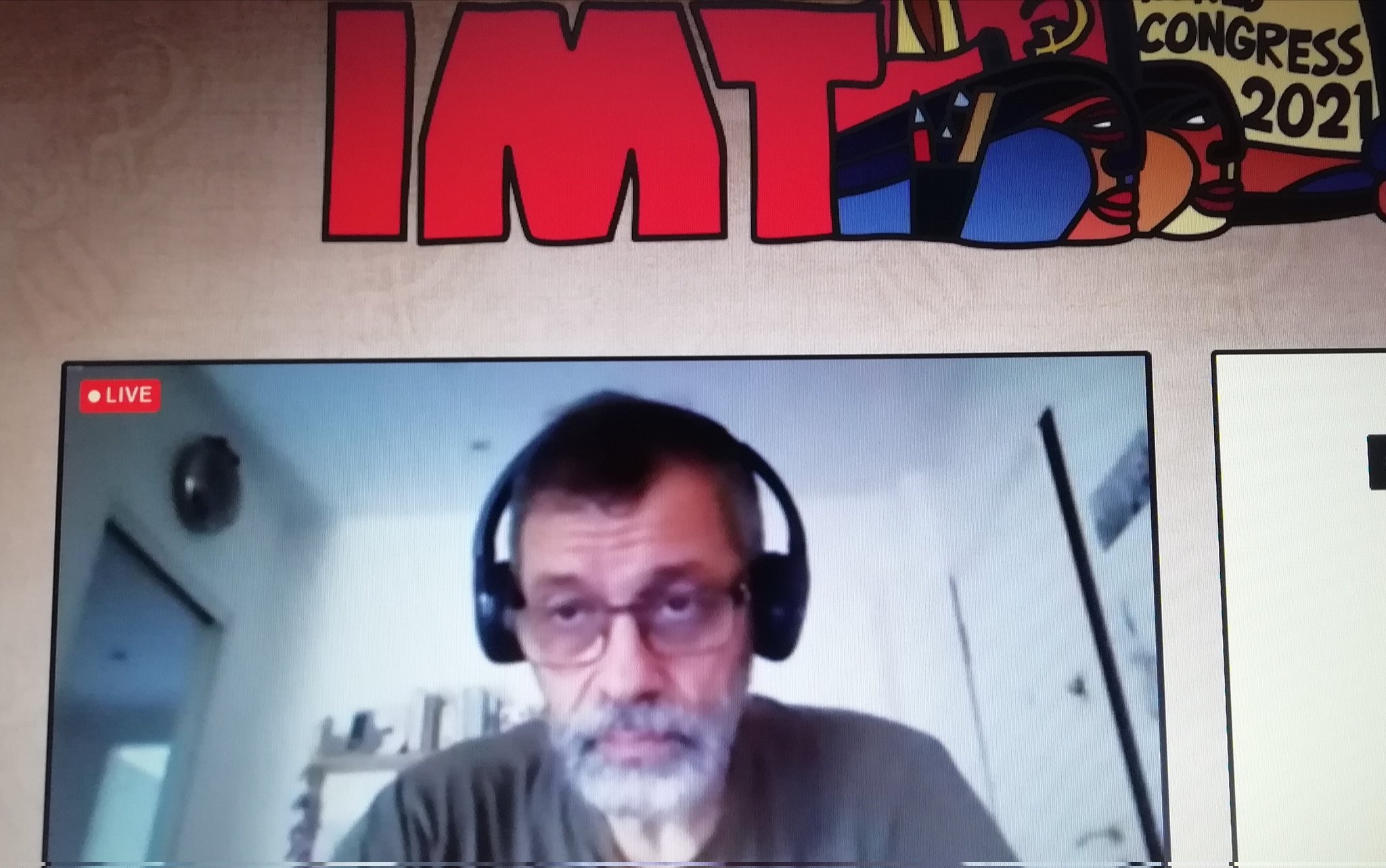 The session was opened by Fred Weston of the international leadership of the IMT.

Like King Canute who tried to hold back the tide, the ruling class today attempts to hold back the class struggle by spreading all sorts of confusion and false ideas. This is the main purpose of bourgeois philosophy today. Ultimately though their efforts must be in vain, as Fred explained.

Marxist ideas, on the contrary, derive their power from the fact that they are true, and it is precisely because they offer an explanation and a way out of the crisis that the IMT, with a serious attitude to theory, has been able to make the inroads it has in recent years.

Fred noted that all other organisations that call themselves ‘left’ tend to scorn theory, seeing it as perhaps an optional extra, or else a sterile pastime conducted by ‘theoreticians’ from their armchairs. In reality, revolutionary theory is anything but sterile when combined with revolutionary action. Quoting the words of Marx from 1843, Fred explained that:

Marxism is in the first instance a philosophical outlook: the philosophy of dialectical materialism, the essential features of which Fred described. But this philosophy itself did not fall from the sky. It is the highest product of millennia of human development and of the development in thought and philosophy.

At the congress it was announced that the IMT will be publishing a book this autumn by Alan Woods, The History of Philosophy, tracing the development of philosophy up to the arrival of Marx and Engels at a clear, scientific outlook.

This book in turn will set the scene for another book currently being written by Alan on the philosophy of Marxism itself. Once published, these books will be powerful weapons in the arsenal of a new generation of revolutionaries. 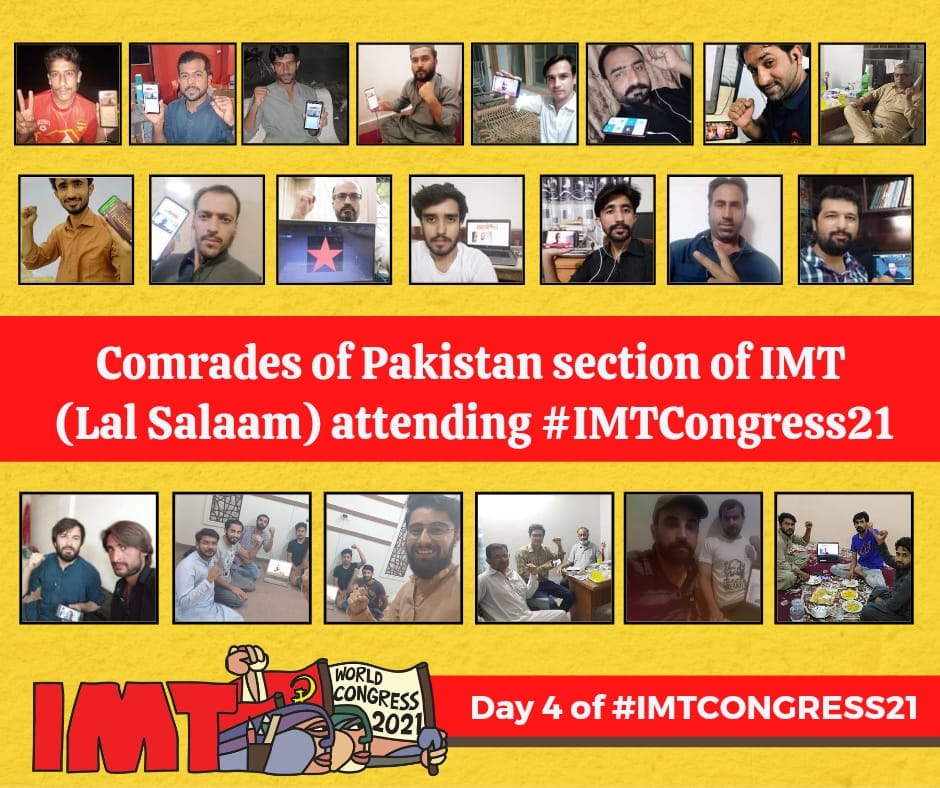 Far from being ‘dry theory’ of little interest to the youth, the publications of the IMT are being devoured by growing layers of revolutionary workers and youth who are joining our ranks. An index of this thirst for theory was given by the figures demonstrating the strides being made by the IMT’s bookshop, WellRed Books. In the past 12 months alone, sales of books have more than doubled, with over 10,300 books being sold in 2020, a feat repeated by other IMT bookshops around the world.

This thirst for theory has also been reflected in tremendous enthusiasm for the newly relaunched In Defence of Marxism magazine as an international quarterly theoretical journal. 6,000 copies have so far been printed in English, German, Spanish and Swedish, with Indonesian, Portuguese and other translations to come.

This congress represents a staging post in an ongoing campaign by the IMT to combat the mystical and idealist nonsense that passes for ‘philosophy’ in bourgeois society today – an ongoing campaign that will continue for years to come and will lay the bedrock for constructing a powerful, Marxist tendency.

Following the session on Marxist theory, the comrades discussed the strides that have been made all over the world in building the International Marxist Tendency. On a world scale, the IMT has grown by 43% since the beginning of 2020 alone. In some sections, such as the US section, we have grown by as much as 87%; and in Indonesia, in the same period, the section has grown by as much as 150%!

Although comrades were present from more than 50 countries, the IMT has recognised sections and groups in 32 of these countries. But where we have individual contacts and comrades, we are now establishing new groups, and where we have groups we are building the firm foundations of new sections. The applications for affiliation from two such new sections – in Yugoslavia and Poland – were enthusiastically and unanimously accepted at the congress. In more than a dozen other countries where groups of supporters of the IMT are being consolidated, the basis is undoubtedly being laid for new, important sections in the not so distant future. 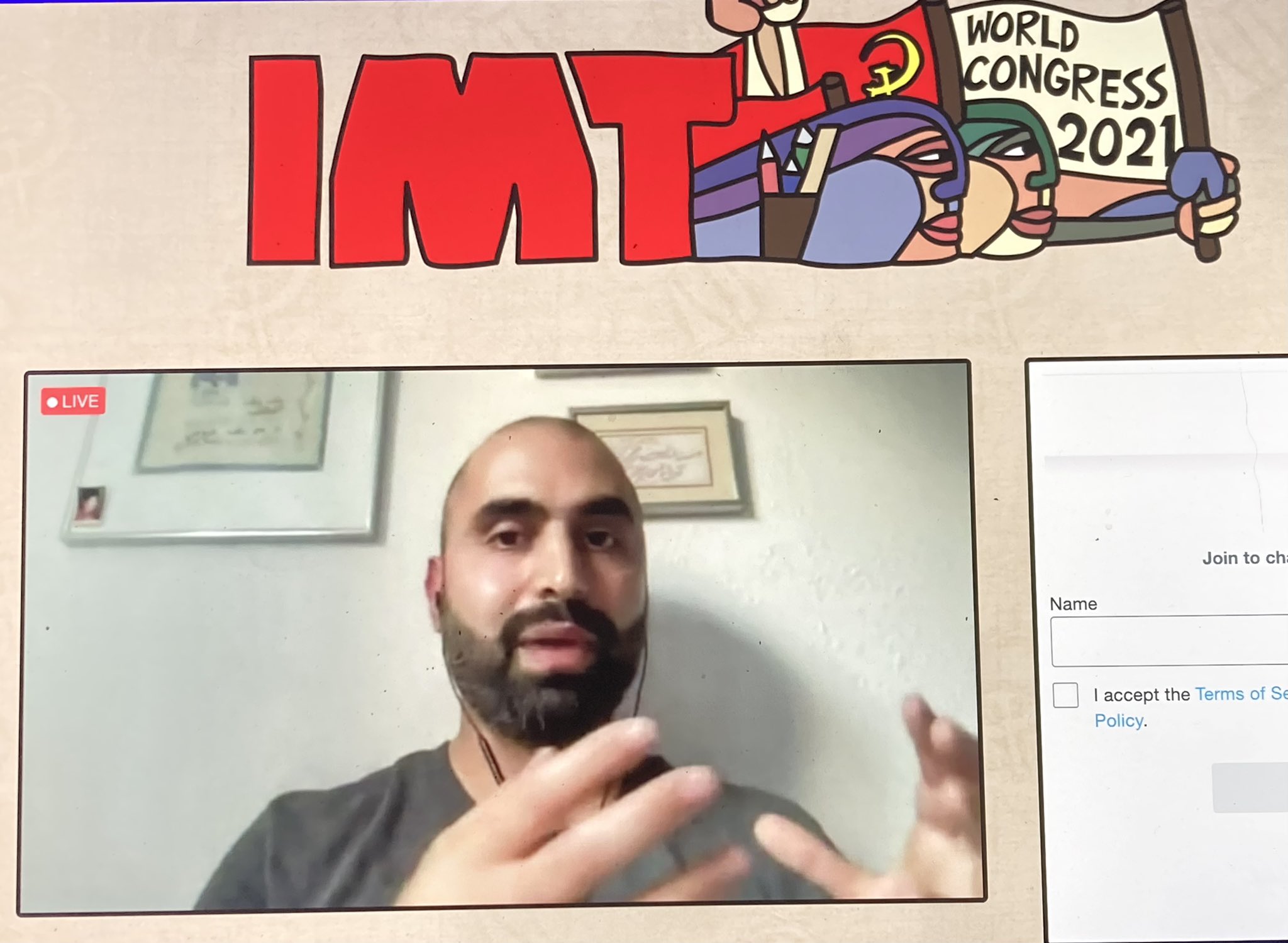 The will to build a powerful Marxist tendency that can alter the course of history was perhaps best expressed in the incredible response to the congress’ financial appeal.

In appealing for comrades to give generously, John Peterson described the vistas opening up for the building of a Marxist force in the belly of the beast itself. Over the course of a couple of years, the amount of people who write in to the website of the US section of the IMT to join us has gone up three to fourfold. The numerical growth, and the enthusiasm and élan of our American comrades was reflected in a doubling of their contribution to the collection.

Adam Pal of the Pakistani section of the IMT followed with a stirring call in the name of internationalism for all comrades to give what they can. In the past few years, the comrades of the IMT across the world have helped secure the release of imprisoned comrades in Pakistan, demonstrating the power of international solidarity.

For comrades in Pakistan, the suffering and pain that this crisis inflicts on millions across the ‘underdeveloped’ capitalist nations means that donating to the building of the International may imply having to skip a meal, education fees or important medicines. And yet, as Adam explained, the victory of socialism in the subcontinent is a matter of life and death for millions, and so hundreds of comrades are prepared to make precisely such sacrifices. 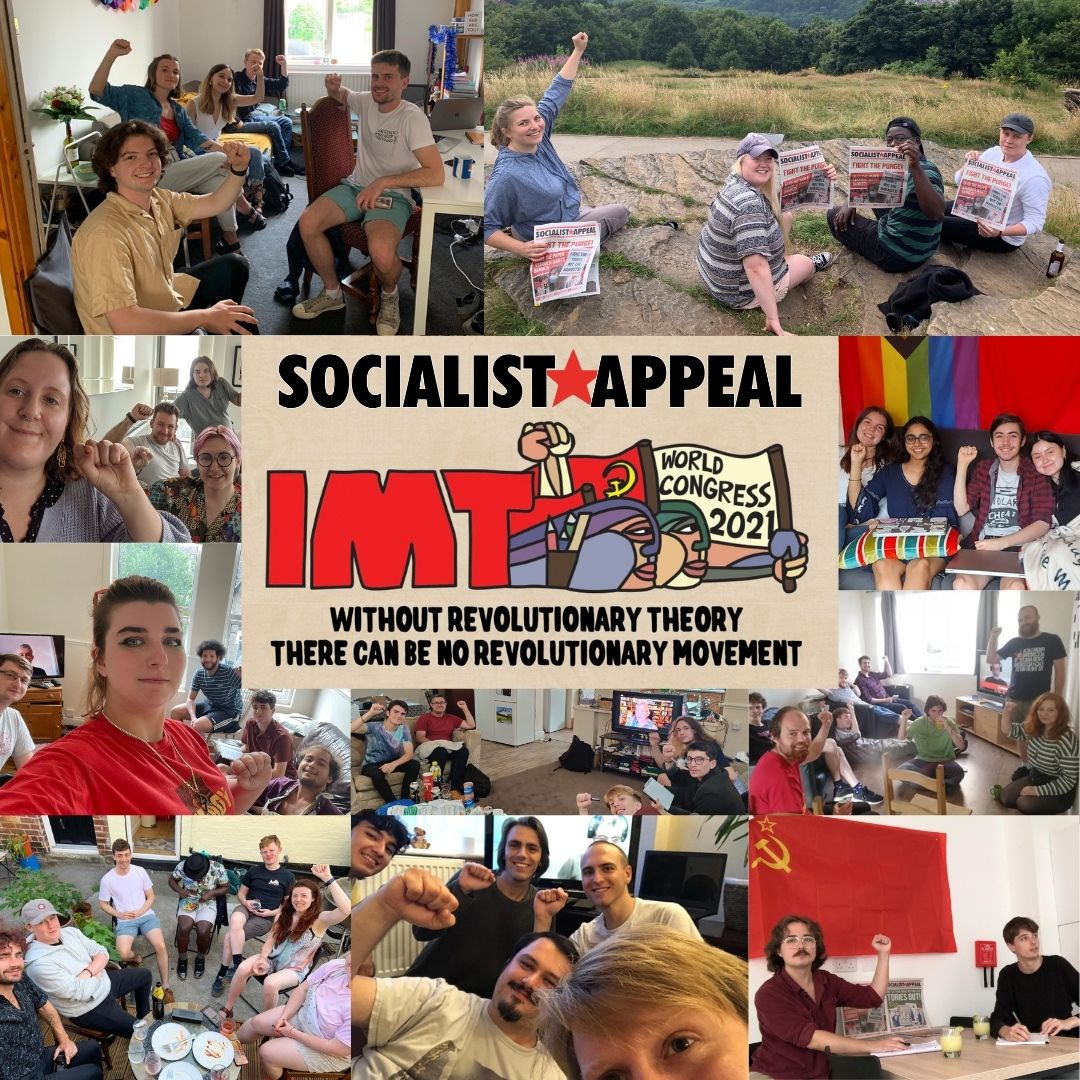 In this spirit of personal sacrifice, the collection raised an astonishing figure of over €370,000 – an increase of more than €130,000 on the total raised at the World School organised just a year ago by the International Marxist Tendency.

In one corner of the world after another – whilst the other tendencies are in crisis and drip with pessimism – the International Marxist Tendency is advancing, confident of the future and firmly dedicated to the struggle for socialist revolution.

The stakes could not be higher. As Alan Woods explained in his closing remarks to the congress:

“What is the real goal of the socialist revolution? It is not just to obtain better living conditions. It is far more important than that. It is to make actual what was has always been mere potential. The great book of culture will be opened to every man and woman to read – we are talking about humanity’s leap from the realm of necessity to the realm of real freedom. That is what we are fighting for. It is the only goal worth fighting for and sacrificing for at this critical moment in human history.”