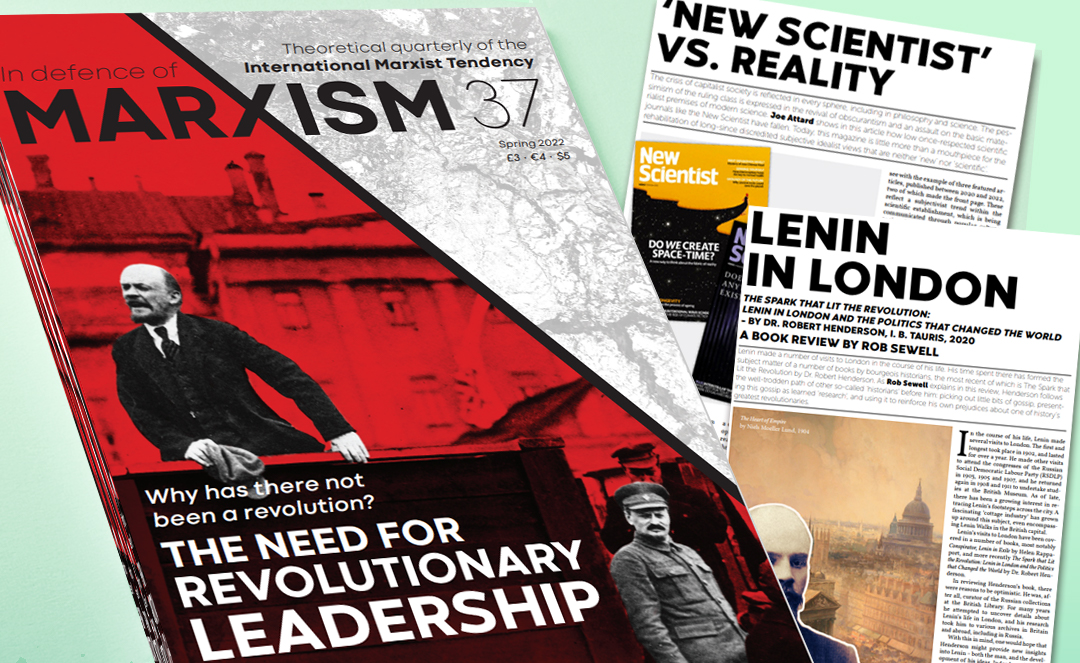 We publish the editorial from the latest issue of the International Marxist Tendency’s theoretical journal, In Defence of Marxism, available to buy now! Alan Woods introduces the contents of the magazine, including a piece of his own dealing with the oft-heard question: ‘why hasn’t there been a revolution?’ Additionally, the issue contains a pair of articles by Trotsky on the role of revolutionary leadership; a polemic against subjective idealism in science journalism; and a review of a new book on Lenin’s time in London.

With world capitalism in turmoil, IDoM issue 37 represents an important weapon in the arsenal of Marxists fighting for a better future.

The main article in the present issue deals with a question that must have been on the minds of quite a few people lately. That is to say: if what you say is true, and the capitalist system is in a deep crisis, then why has the socialist revolution not yet happened?

It would, of course, be easy to dismiss such a question as naïve. And yet it does raise important theoretical questions that deserve an answer. Hopefully, the present article will go some way to providing one, however partially.

In order to underline the main thrust of this article, we reproduce Trotsky’s masterpiece, The Class, the Party and the Leadership, written in 1940 in answer to those pseudo-Marxists who tried to blame the defeat of the Spanish Revolution on the alleged immaturity of the working class. We are also reproducing Trotsky’s letter to the American Trotskyists written in 1929 in which he outlines the basics of party building.

But as we go to press, other questions have had to give way before the most pressing question of the day: the most crucial question of all, a life and death question that, one way or another, affects every man, woman and child on the planet: war and peace.

The purpose of war

There is absolutely no point in trying to interpret history from the standpoint of abstract morality. That would be approximately the equivalent of trying to make the laws of natural selection comply with the principles of vegetarianism.

Whether one likes it or not, all history shows that all serious questions are settled in the end by force of arms. This elementary fact was understood long ago by that wise old sage Heraclitus, who wrote:

“War is father of all, and king of all. He renders some gods, others men; he makes some slaves, others free.”

Incidentally, exactly the same principles apply to war between the classes as war between nations. It is necessary to bear this firmly in mind. Whoever denies this is merely ignoring the facts and deceiving themselves and everyone else.

There can be no such thing as a “humanitarian war”. War, after all, is about killing. One cannot escape this. It is unpleasant. But it is a fact nonetheless.

Carl von Clausewitz, who was arguably the greatest military strategists of all time (and also a disciple of Hegel) understood the dialectic of war very well. He described the aims of war very succinctly as follows:

“Fighting is the central military act. … Engagements mean fighting. The object of fighting is the destruction or defeat of the enemy.

“What do we mean by the defeat of the enemy? Simply the destruction of his forces, whether by death, injury, or any other means – either completely or enough to make him stop fighting. … The complete or partial destruction of the enemy must be regarded as the sole object of all engagements. … Direct annihilation of the enemy’s forces must always be the dominant consideration.”

So that is perfectly clear, isn’t it? The purpose of war is simply to destroy the enemy’s forces, and thus to make it impossible to resist and necessary to accept whatever conditions the winning side chooses to impose upon it.

Before launching a war, the belligerent powers must invent a whole barrage of arguments that serve to unite the masses behind the war chariot, to convince them by all sorts of lies and trickery that “we are the injured party”, “truth and justice are on our side” (as well as God, who, by some miracle, is always on the side of every conflicting army.)

To this end, it is always necessary to prove that the war was started by the other side. This is not so difficult to do, for if no incident occurs to justify such a claim, it can always be manufactured. And the ruling class has in its hands a vast and powerful machine for propaganda, which is immediately mobilised for that purpose.

As a matter of fact, the question of who fired the first shot, who invaded whom, etc., is a trivial matter, which tells us absolutely nothing about the real causes of the conflict. The same is true of the endless stream of horror stories about the barbarous atrocities (real or invented) allegedly committed by a barbarous enemy.

The first and most important fact was explained by old Clausewitz when he pointed out that war is only the continuation of politics by other means. 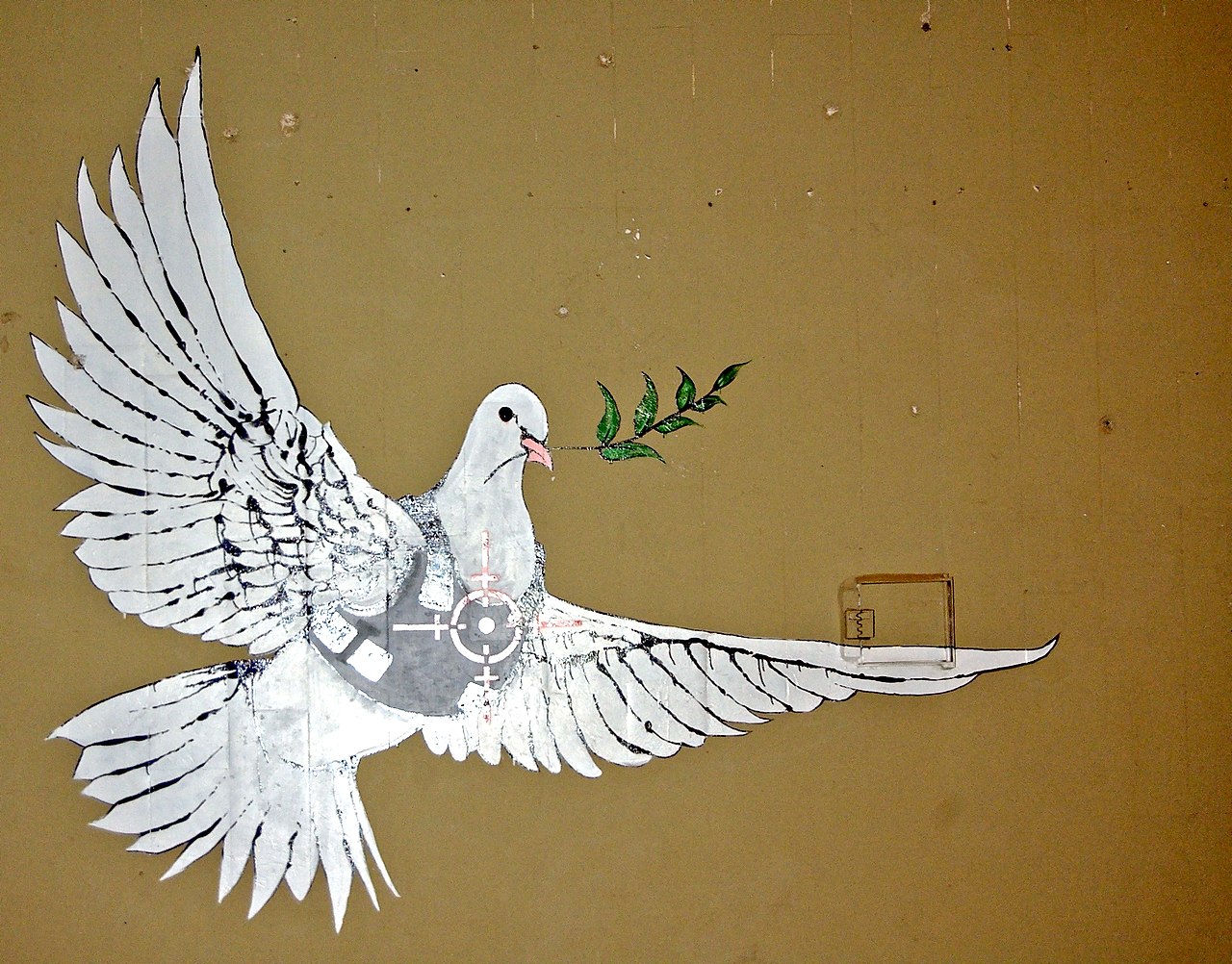 There can be no such thing as a “humanitarian war” / Image: Pawel Ryszawa, Wikimedia Commons

War is only the continuation of the policies pursued by the different belligerent states before the first shots are fired. And that is determined, not by any moral considerations – not by the “national interest”, and certainly not the defence of democracy, the rights of small nations, the maintenance of world peace, or any of the other cynical phrases habitually used to justify the real aims of the robbers and bandits. All of these fine phrases are merely covers for the interests of the bankers and capitalists, which are the true reasons behind capitalist wars.

The only difference between peace and war is that in a war, the interests of the ruling class or clique are expressed in a more blatant and brutal way than before.

The Ukrainian conflict has served as a useful lesson, exposing those self-styled Marxists who have immediately abandoned the internationalist class position and fallen in with the deafening chorus of imperialist propaganda.

It is a sight truly marvellous to behold, when people who describe themselves as ‘lefts’ and (don’t laugh!) ‘Marxists’ immediately fall into the trap of swallowing the lying and hypocritical propaganda of the ruling class.

But Marxists do not have one policy for peacetime and another, entirely different policy, when war breaks out. Amidst this constant stream of garbage, only the IMT has kept its head.

The sober, clear-headed analysis provided by marxist.com is second to none. It provides a firm point of reference to those class-conscious workers and youth all over the world, who are fighting to uphold the spotless banner of revolutionary proletarian internationalism.

Our slogan is that of Vladimir Ilyich Lenin: “The main enemy is at home!”

Speaking of Lenin, the present issue includes an interesting article by comrade Rob Sewell, who effectively demolishes the latest in a never-ending series of slanderous bourgeois books purporting to deal with aspects of Lenin’s life.

As usual, the slanders are so base that, at times, they are quite laughable. They bring to mind the words of Prince Hal, when he describes the monstrous untruths of the drunken buffoon Falstaff:

“These lies are like the father that begets them; gross as a mountain, open palpable.” (William Shakespeare, Henry IV, Part 1, Act 2, Scene 4)

But the author of these lies is not as amusing as Sir John Falstaff. He belongs to that tribe of shrivelled, dried-up old bookworms who, in some circles, pass for intellectuals, but whose only expertise consists in burrowing through dusty old manuscripts in order to extract a few miserable scraps of information, which are then presented to an unsuspecting public as “astonishing new discoveries”.

As Rob very expertly points out, there are absolutely no new discoveries to be found here, and the only astonishing thing is the incredible arrogance of a man whose poisonous malice towards the great Russian revolutionary is equalled only by the depths of his ignorance of the subject about which he claims to write.

During his lifetime, Lenin waged a pitiless struggle against so-called intellectuals and bourgeois university professors who devoted most of their time attempting to “disprove” Marxism in every field, from economics to philosophy. He described them very accurately as nothing but “graduated flunkeys of clericalism”.

Nothing much has changed since Lenin’s day, as we see from the article written for this issue by comrade Joe Attard. In it, he exposes the evident degeneration of the once prestigious British journal, New Scientist.

I recall that when he was alive, my old friend and teacher Ted Grant used to subscribe to the New Scientist, and he looked forward to reading it, together with the Financial Times and the Morning Star. True, it often made him snort indignantly at some of the idealist and mystical articles it sometimes published. But there was also a lot of interesting and educational material you could learn from.

Alas! No more! Nowadays the New Scientist has been dragged into the depths of postmodernist garbage. It has ceased to be a serious scientific journal and has become merely a crude propaganda sheet for subjective idealism of the worst sort. Comrade Joe has done the movement a great service in exposing it for the fraud it is.