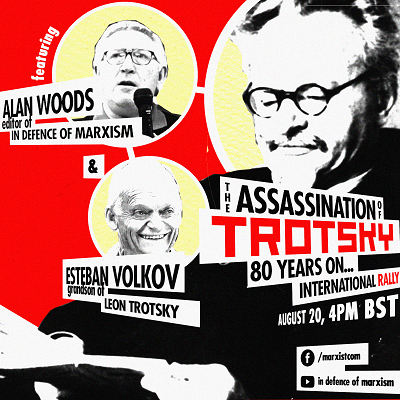 August 20 marks 80 years since the assassination of Russian revolutionary Leon Trotsky by a Stalinist agent in Mexico. The International Marxist Tendency is organising a rally to celebrate the life and ideas of Trotsky, which are today more relevant than ever.

We will be screening film material about Trotsky's life and works, as well as having Alan Woods (editor of marxist.com) speak. There will also be a special message from Esteban Volkov, Trotsky's grandson, who has done sterling work to preserve his grandfather's legacy.

The meeting will be streamed live on Facebook (event here) and YouTube and translated simultaneously into a number of different languages.

In the meantime, you can find an archive of Trotsky's writings at trotsky.net, and for an introduction to his life and ideas, we reccomend 'In Memory of Leon Trotsky', a pamphlet by Alan Woods.

Finally, Wellred Books has published a new edition of The First Five Years of the Communist International, which is a treasure trove of Trotsky's writings and speeches during the building of the Comintern. It is available to purchase here.