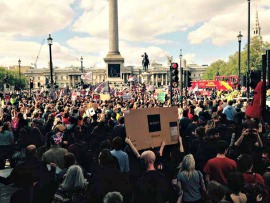 But this was not the case for the 1000-2000 people who gathered in central London at short notice on Saturday 9th May, determined to fight this latest Tory government from day one. The protest, which began in Westminster outside the Tory campaign HQ, went all over central London, much to the confusion and chagrin of the police. What was clear from the slogans and militant mood of those present was that this was far from being a pro-Labour protest: it was an expression of disgust with an entire political and economic system that has condemned us to five more years of austerity, and at an election that offered workers and youth no real alternative to this perspective.

What was also striking was that many of the protesters were not even old enough to vote. It is these working class students, still at school and college, who are faced with the bleakest future. As their attendance at this demonstration proves, these people can see what is happening to the world they are going to inherit, and yet the system gives them no opportunity to change it. The result was a demonstration filled with anti-austerity, anti-establishment, revolutionary sentiment. The militancy and radicalisation was palpable.

No doubt frustrated by the size, success and militant mood of the demonstration <>on Saturday, the police used violence to provoke protesters and kettle them outside Downing Street, albeit with limited success. Heavy-handed policing of demonstrations is to be expected under this government as ordinary workers and youth, radicalised by the scale of the attacks on their living standards, begin to take more militant action.

What was lacking at this demonstration was the presence of the organised working class in the shape of the labour movement. Workers are the ones suffering the brunt of Tory austerity and yet their leadership in the unions have hardly passed comment on the election result, let alone mobilised against the government. Working people are furious at the prospect of another five years of austerity; but instead of harnessing this anger, fusing it with the rage of working class youth, on display at demonstrations like this, and calling a one-day general strike against the government, the trade union leaders simply sow confusion and demoralisation in their ranks.

Saturday's protest was just the first line in the drama of the next few years. As the Tories continue their attacks against workers, the young, and the poor, an intensification of class struggle is going to play out across Britain, with people expressing their rage through demonstrations and campaigns. From single issues like housing to the broad question of austerity, the scene is set for a period of protest, beginning with the People's Assembly demo on 20th June.

As this demonstration showed, spontaneous action, called at short notice, is likely to be prevalent, and the mood for fundamental change among a layer of ordinary people is going to harden. The Tories might have beaten the odds to form a majority government for the time being; but as far as the economy, the constitution and the class struggle are concerned, the situation ahead remains one of uncertainty, instability, and turbulence.