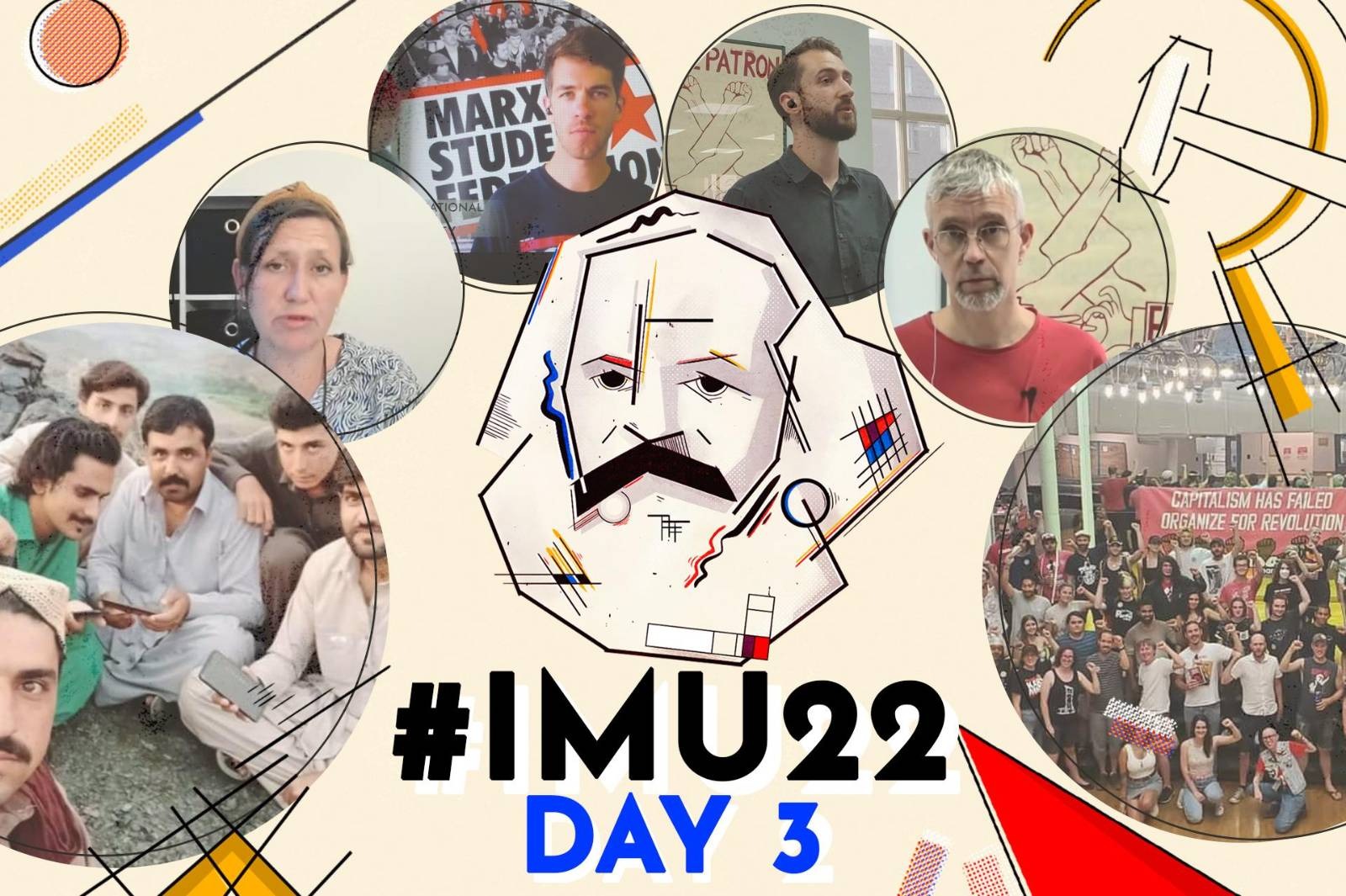 Day three and the International Marxist University (#IMU22) is still going strong – from strength to strength, you could say in fact, as registrations carry on rising; uplifting reports of watch parties continue to flood in; and the most advanced Marxist ideas are beamed around the world.

Such is the thirst for these ideas, that comrades are going to great lengths to ensure they can access every talk. Not only are comrades on the west coast of the Americas waking up before sunrise to catch the first sessions, comrades from Zhob in Pakistan actually climbed a mountain in order to get the signal to watch our talk on ‘Marxism, Money, and Inflation’!

The latest editorial written by Alan Woods for the In Defence of Marxism magazine was titled, ‘For revolutionary optimism’. The commitment shown by our Pakistani comrades and others, has vindicated that title many times over. The enthusiasm with which #IMU22 attendees have thrown themselves into tackling the most important theoretical questions of our time is a clarion call: join the IMT, and fight alongside us for socialism in our lifetime.

Blood and gold: the Spanish conquest of the Americas

As Jack Halinski-Fitzpatrick explained yesterday in his excellent talk on historical materialism: the Marxist method shows how history is not just a series of isolated facts; but rather it draws out the general processes and laws that govern nature and society.

Jorge Martin’s electrifying talk on the Spanish conquest of the Americas was a perfect example of the strength of this method. Taking us through the development of civilisations like the Mayas and the Incas – riven as they were with their own social contradictions – up to the brutal destruction of these societies by the Spanish Conquistadors, we see how the actions of this small band of plunderers cemented the fate of both Spain and Latin America today.

For the people of Latin America on the other hand, it was a catastrophic, bloody affair, and it sealed the continent’s backwardness. But the conquest also played a world-historic role:

“As well as the primitive accumulation of capital, the conquest of America created the world market. The world became united under the rule of trade heralding the birth of world capitalism.”

But the story does not end there. The reactionary Spanish oligarchy have already shown they will never repay the native peoples of America for the barbaric crimes committed against them. However, as David Rey from Spain stated in his intervention:

“the Spanish working class will. We have the debt registered and we are going to repay it. Not with gold, not with silver, but through a socialist revolution that will shine brighter than all the precious metals in the world combined.”

The Permanent Revolution in Europe: 1848

The events of 1848 hold great significance for Marxists. In February 1848 the Communist Manifesto declared, “The proletarians have nothing to lose but their chains. They have a world to win.” Only days later, the workers of Paris had overthrown their king.

But as Josh Holroyd explained in the session, ‘The Permanent Revolution in Europe: 1848’': “When we look back at 1848 today, it appears to us as less as the dawn of a new era and more like a missed opportunity.”

On the eve of the outbreak of revolutions across Europe in 1848, the liberal deputy Alexis de Tocqueville stood up in the French parliament and warned his colleagues: “This, gentlemen, is my profound conviction: I believe that we are at this moment sleeping on a volcano.”

When the eruption came, the capitalist class of Europe was too terrified of the mobilised working class to seize power. The working class, meanwhile, was too weak to take power in its own hands. Since that day, however, the working class has been infinitely strengthened. In Josh’s words:

The Marxist theory of knowledge: how do we know things?

How do we acquire knowledge? This central question in philosophy has confounded thinkers for millennia. It was also the topic of one of today’s excellent discussions.

As speaker Daniel Morley explained, knowledge is not transmitted to us like a beam of light from God; nor is it merely a product of our senses. Whilst it is true that knowledge begins in the senses, that is not the end of the matter. It is an active, not a passive; and a social, not an individual process.

Today, our class enemies are reviving all sorts of idealist rubbish. Daniel explained:

“It stands to reason that those who want to hold society back, must also make use of retrograde ideas: anti-scientific ideas, and must declare a barrier to human understanding and therefore human capabilities.”

By contrast, a class that wants to consciously run society must base itself on the highest possible scientific understanding of reality, and fight against any reactionary retreat to idealism.

The Revolutionary Legacy of Rosa Luxemburg

Marie Frederiksen’s session called on the genuine Marxists of the IMT to reclaim the legacy of Rosa Luxemburg, whom petty-bourgeois reformists of all stripes have appropriated Luxemburg as a ‘kinder’, more ‘democratic’ Marxist, unlike the ‘hard’, ‘bureaucratic’ Bolsheviks.

In actual fact, as Marie explained, Luxemburg was a committed revolutionary who welcomed the Russian Revolution. She was a fierce opponent of the reformist revisionism of Eduard Bernstein and the other leaders of the German SPD. And although her exchanges with Lenin and the Bolsheviks were often sharp, fundamentally they were comrades fighting on the same side.

Many concrete examples were raised in discussion about Luxemburg’s real ideas, including her struggle with the parliamentary cretinism of Millerand, and her condemnation of the leaders of the SPD for isolating the Russian Revolution.

This session was rich in lessons from Luxemburg’s life and works, which remain highly relevant to revolutionaries today.

The spectre of inflation hangs over world capitalism. The cost of basic necessities like food and fuel is skyrocketing, and is already provoking major social eruptions: from the insurrection in Kazakhstan in January to recent events in Sri Lanka and elsewhere.

As Adam Booth explained, in the session “Marxism, money and inflation”: “Inflation, by definition, means that a currency loses its purchasing power. In this respect, it seems like inflation is – as Milton Friedman asserted – simply a ‘monetary phenomenon’.”

But inflation is not simply a ‘monetary phenomenon’. Nor can the economy be controlled through monetary levers and ‘tricks of circulation’ – as both the monetarists and the neo-Keynesian MMTers believe.

Rather, it is, as Adam explained, “a symptom of the anarchy and decay of capitalism. To cure us of this plague, we must rid ourselves of the market, by placing the economy under workers’ control.”

Once the economic potential that capitalism has created is unlocked in a planned economy, humanity will enter an epoch of superabundance. And as scarcity becomes a distant memory, money will cease to anything more than a token of accounting. As Leon Trotsky explained:

“Money cannot be arbitrarily ‘abolished’ – it must exhaust its historic mission, evaporate, and fall away.”

Competition, monopoly and planning: the market vs socialism

Capitalism has created enormous productive potential. And despite libertarian fairy tales about the wonders of the free market, a great deal of planning goes on under capitalism. At the same time, the unplanned anarchy of the world market maintains a chaotic existence, wreaking havoc across the world.

As Niklas Albin Svensson explained in the session ‘Competition, monopoly and planning: the market vs socialism’:

“The organisation of socialist production will be very different. We're going to turn production on its head, or the right way up. Production chains are already social, they use vast arrays of components from across the world, involving thousands of different companies employing hundreds of thousands of workers.”

Planning, aided by the vast developments of computing technology, will enable us to take the control of production out of the hands of the anarchic market forces, and put the workers back in charge.

“Rather than being a mere appendage of the machine, the worker will become the master of the machine. That is our proposition. Workers' control will mean that conscious human decision making will determine the direction of society.”

We hope that all #IMU22 attendees have enjoyed the broad range of talks so far, and that they have given you a flavour of the richness of Marxist theory – but we are not quite done yet!

And finally, we hope you will tune in to the closing rally on ‘Building the Revolutionary Party,’ introduced by Hamid Alizadeh – where we will discuss the next steps after #IMU22: turning these ideas into the tool we need to destroy the rotten capitalist system.