This is not what one would normally understand as a “negotiation”, in which both parts come together at a middle point. Rather, the Syriza government has been forced to accept and agree to every demand of the troika. The latest Greek proposal amounts to 8bn euro worth of austerity measures over 2 years.

Most of these are in the form of increases in the rate of VAT for different products and services. This accounts for 2bn euro and includes an end to the special VAT rate for Greek islands (which is likely to be opposed by Syriza’s government partner ANEL (Independent Greeks). VAT of course is a regressive tax, which hits working people harder.

An additional 1.5bn is to be saved through cuts in pensions. These are not actual cuts in the amount pensioners receive, but they are cuts nevertheless as pensioners’ health and other contributions will be raised. There will be also a phasing out of early retirement schemes and an increase in the retirement age to 67 years by 2025. This breaks yet another of the government’s self imposed “red lines” and comes after cuts in pensions of up to 48% in the last 4 years. 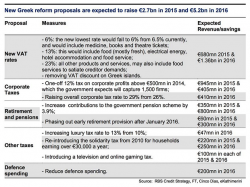 Another 410 million will be raised through an increase in corporation tax next year, as well as a one-off 1.4bn profits tax for companies with profits over half a billion euro. These are the only really progressive taxation measures in the whole package.

Other aspects of the proposal which were already included in the document presented by Varoufakis to the troika last week are the maintenance of the regressive property tax (ENFIA) introduced under the Memorandum, as well as the continuation of the privatisations program. An end to privatisations and the immediate abolition of ENFIA were two key points of the Thessaloniki program on which Syriza stood in the election.

Five months later, very little is left of the popular mandate which Syriza got on January 25 to put an end to austerity policies and the Memoranda signed by previous governments. One is justified in asking, even from the point of view of the supporters of the government’s negotiating tactics, whether it was worth waiting all this time, if in the end the demands of the troika have been met.

What was the point of the report by the official Audit Committee on Public Debt which was presented last week by Parliament speaker Zoe Konstantopoulo which declared Greece’s public debt as “odious, illegitimate and illegal”?

The report was very clear in its conclusions: ““All the evidence we present in this report shows that Greece not only does not have the ability to pay this debt, but also should not pay this debt first and foremost because the debt emerging from the Troika’s arrangements is a direct infringement of the fundamental human rights of the residents of Greece. Hence, we came to the conclusion that Greece should not pay this debt because it is illegal, illegitimate and odious.” (Link). Now the government has committed itself to further austerity measures in order to continue paying this very same debt.

Not only this, but as many observers have commented, this is an austerity package which will knock off the already battered economy 1.51% of GDP this year and 2.87% next year (which is in fact slightly more than the 1.5 and 2.5% demanded by “the institutions” (as the troika is now known). This will have a severe recessionary impact on the already fragile Greek economy, which in turn is likely to prevent the agreed targets for primary budget surplus from being met. This is an unmitigated disaster and the continuation of the failed policies of the last 5 years.

Even despite all the concessions which the troika has extracted from the Greek government by using extreme pressure and blackmail, the deal has not been closed. A new meeting of the Eurogroup has been convened for Wednesday evening to iron out the last details. It is still possible that they will demand even more detailed commitments (read concessions) from the Greek government. Even this morning, the German Vice-chancellor Sigmar Gabriel declared “We will see if the Greek proposals are sufficient. If not, we’ll have to keep talking.”

The deal, or proposed deal, means that Greece continues to be shackled to the chains of austerity and cuts.  The question now is, how will society react to this? The great expectations created by the election of Syriza have been progressively dissipating over the last five months of endless negotiations with the troika which every day have brought ever greater concessions to its demands.

There are already reports of opposition by pensioners who have called a demonstration against the deal this afternoon, as well as the Communist trade union front PAME. There is also opposition from within Syriza. Left Platform supporters within the government will now be faced with a stark choice: to oppose these measures and be kicked out of the cabinet, or cave in and backtrack on their earlier promise not to vote for austerity.

There are media reports that even before the latest concessions, a prominent member of the Syriza leadership Vassilis Chatzilamprou, who was until recently a member of the majority faction supporting Tsipras, said: “We cannot accept strict, recessionary measures. People have now reached their limits.”

Central Committee member Stathis Kouvelakis, from the Left Platform, commented: “The list of the measures of the new austerity package proposed by the Syriza government is absolutely depressing… Will this downward spiral stop before it's too late! It's more than time for the social movements and the combative forces of the Left to wake up and fight!”

The Communist Tendency has correctly described the latest Greek offer as a new “Memorandum” and urged “members of parliament, officers and members of SYRIZA and all other trends and components to take a clear position and to resist the flagrant breach of popular mandate from the government and the party leadership. The party's MPs should commit to vote against the Memorandum agreement.” (Link)

There is now talk by the European Union of providing Greece with 35 bn euro worth of aid programs, perhaps with the aim of softening the blow and helping the government get these measures passed.

The truth is that this climb down is the result of the relentless pressure imposed by the troika, the representatives of the bankers and capitalists, on the Greek government for the past 5 months. All sorts of blackmail, threats, withholding of funds and dirty tactics have been used in order to force the Greek government to capitulate to their demands. Syriza was elected on the basis of a program of putting an end to austerity and the Memorandums, but European capitalists could not allow it to implement it.

In reality, what this means is that within the limits of capitalism, there is very little room for implementing any other policy, other than cuts and austerity. From the very beginning, Syriza’s Communist Tendency warned that the Thessaloniki program was based on the false idea that the troika would agree to make substantial concessions. Now this has been proven to be a correct assessment.

A sharp change of course is required, and this can only come from the mass mobilisation of the Greek working people, those who voted for Syriza together with the Syriza members and activists against this latest deal imposed by the troika.

But we must speak clearly and honestly. The conditions for such mobilisation are now much worse that they were five months ago. At that time the government could count on rates of popular support of up to 80% and there were spontaneous mass demonstrations. Now there is a mood of shock, anger and confusion. Support for the government has slowly evaporated and there have even been sizeable anti-government demonstrations in Syntagma Square over the last few days, something which would have been unthinkable before.

In reality, the only way to effectively mobilise Greek workers, pensioners, youth, the unemployed, is to offer a clear alternative to austerity policies. That can only be done on the basis of a program which would include the immediate repudiation of the debt, the nationalisation of the banks and key levers of the economy, the reversal of all austerity measures and a shock program of social emergency dealing with housing, healthcare, education and other basic needs - a socialist program.

What the experience of Greece in the last five months demonstrates is that if one accepts the logic of capitalism then that is a slippery slope towards implementing austerity policies which make workers pay for the crisis of capitalism. The only way to break with austerity and cuts, to put an end to the Memoranda, is to break with capitalism.