Extraordinary events over the last few days, surrounding the fate of Jacob Zuma, have plunged the ANC – and the country – into a deep crisis. Zuma’s scandal-plagued presidency is clearly untenable for the Ramaphosa faction, which marginally controls the ANC. Moreover, Zuma’s continued presence is destabilising the whole political situation and could damage the ANC’s electoral prospects in 2019. Big business is desperate to dig itself out of a hole. The problem for them is that the balance of forces between the two fighting ANC factions is very even, as we saw at the national conference in December. Now the crisis in the party has put the whole country in political limbo.

As a result of the divisions, the party is now truly in a state of paralysis. It is unable to take firm decisions and even less able to carry them out. The tensions in the party have spilled over into the streets with clashes erupting outside the party’s headquarters. This is a new element in the situation and could escalate the general political turmoil.

Ahead of the annual State of the Nation Address and the opening of parliament, which was supposed to take place on 8 February, the new party leadership has held a series of meetings to discuss Zuma’s exit. On Sunday night the ‘top six’ officials met with Zuma at the presidential residence in Pretoria. Ahead of the meeting, the leadership gave completely contradictory reasons for the purpose of the meeting. According to Ace Magashule, the new secretary-general and Zuma ally, “there is no decision” that Zuma should step down. His deputy, Jesse Duarte, another Zuma ally, said that Zuma will remain president until next year's election. But this was contradicted by Gwede Mantashe, who is now the chairman of the party, and Paul Mashatile, who told CNBC that Zuma must step down immediately.

Jacob Zuma claimed to have "no intention" of resigning / Image: public domain

Divisions in the leadership played into Zuma’s hands, who said on Sunday in no uncertain terms that he has no intention of resigning. With more than 780 counts of corruption, racketeering and fraud hanging over his head, among other legal battles, he clearly has no incentive to give up the office of the presidency. This is a matter of self-preservation for Zuma and his faction, all of whom might end up in jail if they leave their government posts without a firm guarantee that they will not be prosecuted. With significant support among the more backward rural provinces and lumpen elements in the cities, Zuma and his cabal are prepared to cause serious instability. We saw a glimpse of this possibility on Monday when BLF (Black First Land First) and other reactionary groups mobilized a few hundred lumpen elements and organised a ‘Hands off Zuma’ march to Luthuli House. BLF and their leaders are funded by the Gupta family and are strong backers of Zuma.

In response to BLF’s march to Luthuli House, supporters of Ramaphosa and ANC members in general, organised a ‘protect Luthuli House’ demonstration. With BLF members vastly outnumbered by the pro-Ramaphosa group, the police decided to move the BLF group a few blocks away and organised for Ace Magashule to address the group and receive their memorandum. This infuriated the ANC group, which loudly booed Magashule as he walked back to Luthuli House. ANC members called him a ‘sellout’ and as he walked into the building he was nearly mobbed by the crowd. Only the presence of the police saved him from being physically attacked. This signifies a clear escalation of the crisis within the party. Up to now, the infighting has been confined to the official party surroundings. With the situation spilling out onto the streets, the turmoil is spreading to the rest of society.

While all of this took place outside the building, the party’s National Working Committee held an emergency meeting inside. Then, seven hours later, the party issued a statement that the committee had submitted the matter to the National Executive Committee: the highest decision making body between conferences. This was an indication that Ramaphosa's faction came out victorious in the debate. With the threat that the NEC could decide to recall Zuma hours before he is supposed to give his major policy speech, and with the Economic Freedom Fighters putting enormous pressure on the ANC in the form of a no-confidence motion against Zuma, tensions in the country reached fever pitch. 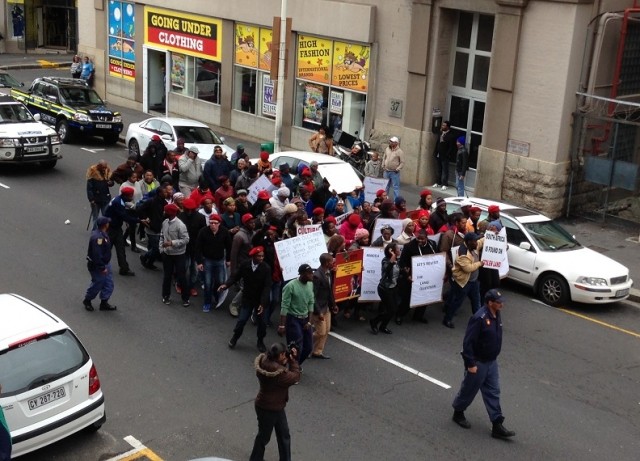 The EFF put pressure on the ANC with a motion of no-confidence against Zuma / Image: public domain

The EFF, which has been setting the political agenda since it was formed around three years ago, vowed not to let Zuma deliver his speech on Thursday and said it would push for its no-confidence motion to be debated before the State of the Nation Address. This move completely outflanked the ANC. If the NEC of the ANC decided that Zuma should be removed in the short term, it could only happen through a no-confidence motion – which the EFF has already tabled! It would have meant that the ANC parliamentary caucus would have to support a motion of the opposition. This would clearly have been an intolerable situation which could have torn the ANC to pieces. The other option is impeachment, which could take months to complete. This is time the ANC leadership does not have. If Zuma does not resign or is not removed over next few days, the crisis in government could lead to an all-out crisis of the whole political system, which in turn could have revolutionary consequences.

There are other legal considerations for the ANC if they decided to support a vote of no confidence in Zuma. If the motion passes, then the whole Cabinet must resign, including Ramaphosa as Deputy President. In such a scenario the constitution gives the powers of the executive authority to the Speaker of the National Assembly for a period of 30 days. This would result in a constitutional crisis. A delay or postponement of the opening of parliament would have meant that the national budget could not be passed before the start of the financial year. In turn, this would throw the administrative functions of the of the whole government into chaos.

The ANC leadership then decided that the only way out for them is to take the unprecedented step of postponing the State of the Nation Address. This is a sign of how serious this crisis is. Never before has a this event been postponed – not even in the turbulent periods of the 1980s when there was a revolutionary crisis and a state of emergency. The decision to postpone SONA is clearly intended to give the ANC and specifically Ramaphosa time to deal with the Zuma crisis. 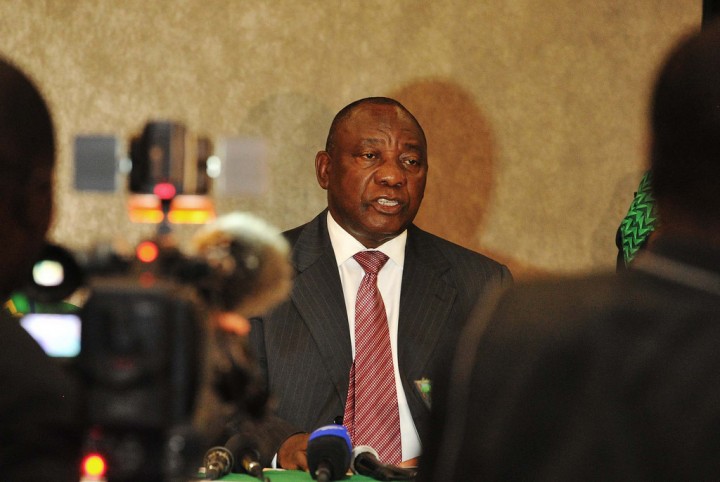 With the State of the Nation Address postponed, Ramaphosa will hold talks with Zuma, likely to negotiate his departure / Image: Flickr, GovernmentZA

With the State of the Nation Address postponed, Ramaphosa decided to hold fresh and direct talks with Zuma. On Wednesday, Ramaphosa said in a statement that he and Zuma began the talks on Tuesday night and hoped to conclude their discussions and report back to country “in coming days”. This was the first official confirmation of direct talks between the two. The threat of being recalled clearly brought Zuma back to the table. Later, the ANC, in one of its rare statements, announced that the urgent meeting of its NEC has been postponed to 17 February. The fact that the meeting has been pushed back indicates that some sort of deal has possibly been reached. The most likely scenario is that Zuma will resign at some point in the next few days. The delay is clearly to decide the terms of Zuma’s exit, which might include a presidential pardon if he is convicted in any of his legal battles.

However, this could also be one of Zuma’s famous time-delaying tactics, which he has utilised effectively to stay in power for the last decade. Zuma himself infamously called it his “Stalingrad defence” (fighting every little battle by whatever means possible) in order to buy time. If indeed the Ramaphosa camp has put the ball in Zuma’s court, he will have no qualms about postponing his departure for as long as he possibly can – even at the risk of plunging the country further into crisis. Whatever the facts are, it is clear that Zuma is on his way out. The problem is that the party is in a state of paralysis. Ramaphosa famously said in a interview at the World Economic Forum recently that his aim is not to “humiliate” Zuma. This is coded language for wanting to avoid a split in the party. But whatever they do will be wrong. Whether Zuma stays or goes, the crisis of the system will remain.

Even by South African standards the last few days have been extraordinary. South Africans are eagerly following the situation, trying to make sense of the chaos. Uncertainty abounds and no one really knows who is actually running the country on a day to day basis. The endgame of the Zuma presidency is only the prelude to further instability and turmoil in the ANC and the country. But in the last analysis, the political instability is only a reflection of crisis of the capitalist system – which in South Africa, is especially acute.