Two weeks ago, British Prime Minister Theresa May embarked on a three-day jaunt across Africa, visiting South Africa, Nigeria and Kenya. The purpose of May’s whistle stop tour (aside from showcasing her inimitable dance moves) was to strike up post-Brexit trade relations with Africa’s “emerging economies”. The visit was a cringe worthy affair that saw May shuffle awkwardly from one public relations blunder to the next, and it highlighted the decline of British imperialism and the crisis facing the capitalist class as the Brexit cliffedge looms.

With the deadline in March 2019 approaching, a no-deal scenario is a real possibility. While May has assured voters that this would “not be the end of the world”, Chancellor Philip Hammond was less sanguine, predicting the result of a car crash exit would be a 7.7 percent hit to GDP over the next 15 years: worse than after the 2008 financial crash. Conversely, leading Brexiteer, Boris Johnson compared May’s current Brexit strategy to wrapping “a suicide vest around the British constitution” and giving the detonator to Brussels.

This all represents a continuation of the crisis that has engulfed the Tories over Europe, with May caught between the warring pro-EU and Brexiteer wings of her party.

May needs to fill the vacuum that Brexit will leave in Britain’s trade portfolio. This problem is made all the more acute by the fact that Donald Trump shows no sign of cutting May a decent trade deal. Despite her sycophancy during the president’s UK visit in July, Trump lambasted the soft Brexit proposal that May is currently trying to pass through parliament in an interview with the UK Sun newspaper. He stated that if the so-called Chequers deal goes through “then [Britain’s] trade deal with the US will probably not be made.”

Unable to count on the old “special relationship”, the Prime Minister – and British capitalism – urgently need to forge new trade and geopolitical alliances with just about anyone, even very small economies that British imperialism once dominated.

The African ruling classes also have reason to seek common cause with May. Trump’s trade tariffs on aluminium and steel, despite being targeted at major competitors like China, will inflict second-hand damage on smaller economies. As the Kenyan proverb goes, "When elephants fight, it is the grass that suffers". 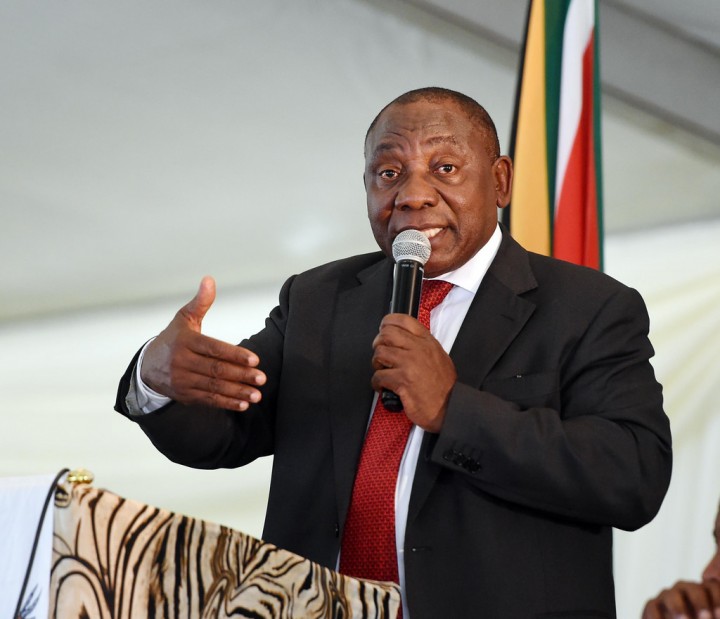 In South Africa, for example, steel imports to the US totaled $950m in 2017. Though this represented only about 1.4 percent of total US imports that year, it was a quarter of all South African-US exports. South African steel is set to be hit with heavy duties in the States, while the country is already running a significant production surplus; this despite the Department of Trade and Industry (DTI) arguing its relatively limited steel exports pose “no national security” concerns to America. The DTI correctly described this impact on South Africa as “collateral damage in the trade war of key global economies.” Losing the US market could put 300,000 tons of steel production at risk, along with 7,500 South African jobs in the steel and manufacturing supply chain. As ever, protectionism is the export of unemployment.

The fallout from Trump’s tariff war means South African President Cyril Ramaphosa needs support from UK and countries in Europe in order to create new markets in which to sell South African goods. As such, all past enmity between the Tories and ANC was forgotten as the two leaders agreed to forge a “closer relationship” in the future. In a striking reflection of the enfeebled state of British capitalism (and the opportunism of the post-Apartheid, South African ruling class), the bourgeoisie of a former colony welcomed May warmly, while the PM was forced into the humbling position of literally dancing for a favourable trade agreement.

In her Cape Town address, May immediately put her foot in her mouth when she spoke of an Africa that was “very different to the stereotypes” – presumably, this was supposed to be a compliment. She also played to the Tories’ Brexiteer base by pointing out that, as commercial partners, African countries are “less likely to export terrorists or illegal immigrants” than European or Middle-Eastern nations.

In spite of these backhanded ‘compliments’, the UK Prime Minister was embraced by some sections of the African bourgeoisie. Aly-Khan Satchu, financial analyst in Nairobi, described the “mood music” around the trip as “quite sweet”. Incredibly, he suggested that Britain’s colonial history gave it strong “brand equity” on the continent. This “brand equity” came up again in an agonising interview with Channel Four News, in which May was forced once more to dance awkwardly – this time around the issue of Tory policy during the Apartheid era.

Asked by Michael Crick what she “personally” did to help end the Apartheid regime, May was forced to concede: “I think you know full well that I didn’t go on protests, Michael”. This stands in stark contrast to Jeremy Corbyn, who – despite enduring endless accusations of racism from his parliamentary colleagues – was arrested for protesting against Apartheid in the 1980s.

Following the interview, May was due to visit Robben Island, where Nelson Mandela was imprisoned for 18 years. May was asked whether, as a “loyal member of the Conservatives”, she agreed with Thatcher’s description of the ANC and Mandela as terrorists. This was not even the most extreme view in the Tory party at the time: the Federation of Conservative Students wanted Mandela hanged, and then-Tory MP Teddy Taylor called for him to be shot.

In response, the Prime Minister could only bleat platitudes about Mandela’s “immense statesmanship”. The grilling was painful to watch, and represented May being placed in a position of extreme weakness out of sheer necessity. Were it not for her desperate need to strike up new trade arrangements, there is no way she would have ever set foot on Robben Island and be forced to answer for the Thatcher government’s support for Apartheid.

May stated that she wants the UK to be the G7’s number one investor in Africa by 2022. She was accompanied on her trip by a cabal of 29 business figures representing the interests of British capitalism, including the Chief Executive of the Standard Chartered Bank, Bill Winters.

The Commonwealth Development Corporation (CDC), a UK government-owned private equity group – backed by Bob Geldof – will also invest up to £3.5bn in African projects in the next four years as part of the pledge. Far from being a philanthropic organisation, the CDC is a brute capitalist enterprise. In 2010, it emerged that it was soaking up massive profits from schemes such as the construction of hotels and shopping centers that enriched its managers, while bringing no benefit to the poor. These pirates are eager to carve chunks out of the African market, and Ramaphosa is only too happy to let them size his country up as long as he and the rest of the South African ruling class receive their own compensation. 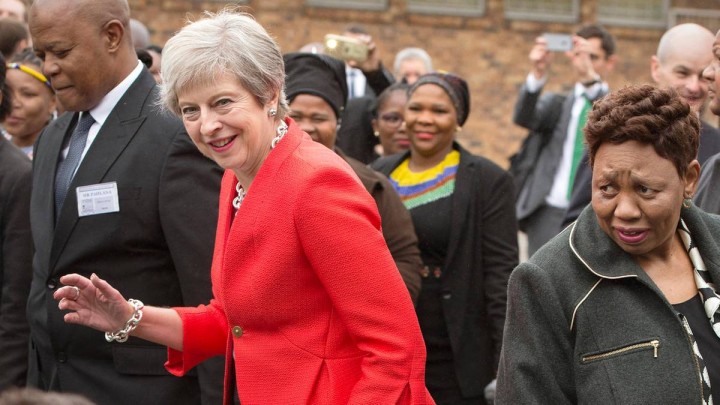 May’s visit reflects a collapse of the old order in a period of world economic crisis. The ruling classes are clamouring for new markets and alliances as world relations shift / Image: public domain

Fundamentally, May’s visit reflects a collapse of the old order in a period of world economic crisis. Under the present conditions, where global economic demand is squeezed, the ruling classes of all nations are clamouring for new markets and new alliances as the old ones enter into crises and world relations shift.

China remains the biggest foreign player in Africa, and is developing its nascent imperialist interests through infrastructural investment in Zambia, the Democratic Republic of the Congo, and various countries in central Africa. But the bourgeoisie of many other nations are now tripping over themselves to get a piece of the continent. In addition to May: Modi, Macron, Erdogan and Merkel have all visited Africa since June.

Finding new markets and geopolitical allies is especially pressing for Britain, due to Brexit. France is currently the most important actor amongst the G7 (Macron has made nine visits since taking office), but French influence in Africa is declining, creating space for countries like the UK. South Africa and Nigeria alone represent 50 percent of GDP for the entire continent. If May can establish a foothold in these countries, the African market would be wide open.

The problem is, it’s not enough. It’s not merely a case of the capitalists securing new markets, but profitable markets. While May described South Africa, Nigeria and Kenya as “key partners” for the UK on the continent after Brexit, their combined GDP — about $770bn — is barely equal to that of the Netherlands. Moreover, half of Nigeria’s 180m people live on less than $1.90 a day, meaning few could afford British goods and services.

Dipo Salimonu, the chief executive of a Nigerian fuels storage company, was quoted in the Financial Times as saying “it’s futile to look for consumers to replace [the EU] in this part of the world.” Indeed, British capitalism has 45 percent of its markets in Europe. The entire African continent currently accounts for just 3 percent of all UK goods and services exports. It is no serious alternative to the European market – nor will be any patchwork of similar, trifling trade deals.

The fact that May is courting such small fry as trading partners is evidence of the depth of the crisis she faces. Brexit has brought to the surface a deep rot at the heart of British capitalism, which has manifested in the disorientation and internal divisions of its political representatives, as seen in the civil war that has gripped the Tory Party. 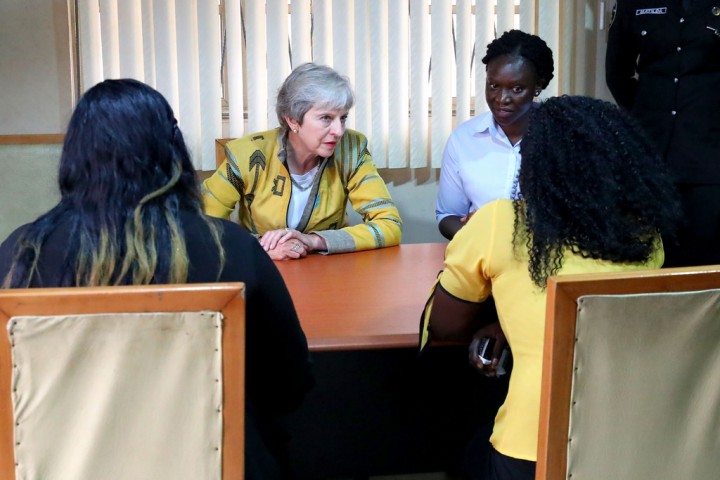 May's courting African nations is evidence of the depth of the crisis she faces / Image: public domain

Furthermore, it is not as though dozens of countries are lining up to make trade deals with Britain: on the contrary, it appears increasingly isolated and friendless. Meanwhile, Trump has no intention of paying Britain any special favours, and indeed is exploiting the divisions in the Tory Party, playing the country off against the EU (and especially Germany), to the advantage of American capitalism.

Any hope on the part of the British ruling class of striking new trade deals equal to the EU is completely utopian. In fact, Brexit has meant that Britain will even struggle to obtain the best deals from African nations, next to EU member states that have Brussels’ economic and political clout behind them. Once again, May risks being forced to the back of the queue.

In an attempt to sweeten the deal, May tried bribing the Nigerian ruling class with chickenfeed – specifically a £10.5m donation to help fight “terrorism and trafficking”. But she endured open mockery in Kenya, where Prime Minister Uhuru Kenyatta said he was happy a British head of government had “found time” to visit after 30 years. To rub salt in the wound, he claimed not to remember former-Foreign Secretary Boris Johnson’s name, calling him “the bicycle guy”.

Salimonu aptly noted that May’s attempts to court African states carried the “whiff of desperation”. It is undeniably satisfying to watch the wretched and degenerate British ruling class going cap-in-hand to a continent it once dominated and pillaged. This reversal of fortunes reflects a general downward trajectory for Britain since the Second World War, accelerated by the 2008 crisis and brought to a head by the Brexit referendum. Any new trade deals struck in Africa will be a drop in the ocean that will do nothing to cushion the economic impact of Brexit. No matter how many countries she visits, or how enthusiastically she dances, May is powerless to improve Britain’s standing on the world stage.

Meanwhile, the current economic turmoil can only spell further misery for African workers and peasants, who are caught between the effects of Trump’s protectionism, the opportunism of their own bourgeoisie, and the interests of second-rate imperialist powers like Britain.