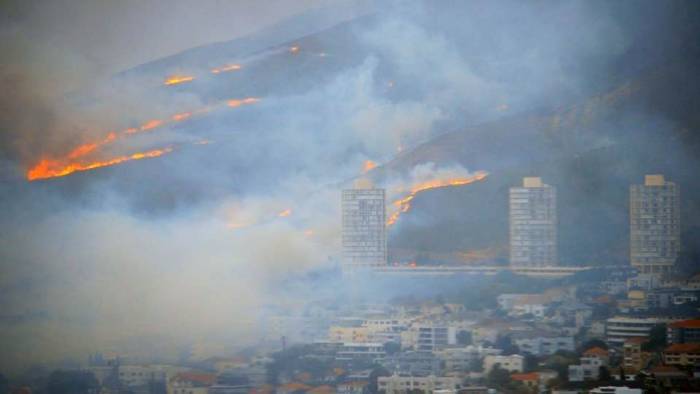 Huge fires have inflicted massive damage on Cape Town, destroying priceless cultural artefacts and forcing thousands to evacuate. This preventable disaster was a product of the decrepit capitalist system, and has thrown the deep inequality and social rot in South African society into sharp relief.

At 8:45 am on Sunday morning, a fire broke out that burned vast areas of Cape Town’s Table Mountain, historical landmarks and a University of Cape Town library that held priceless collections of African antiquities and irreplaceable historical manuscripts. Within hours, several buildings of the university, including some student residences, were engulfed in flames. Around 4,000 students had to be evacuated from the campuses.

The library housed printed and audiovisual materials on African studies; 1,300 sub-collections of unique manuscripts and personal papers; and more than 85,000 books and pamphlets on African studies, including up-to-date materials and works on Africa and South Africa printed before 1925. It also contained one of the most extensive African film collections in the world. Most of that has now gone up in flames. The fire triggered automated shutters designed to shield the library's rarest objects, but it's unclear if they were able to prevent the fire from spreading from the reading room to the special collections nearby.

Residents in the southern suburbs reported huge plumes of smoke on the eastern side of Devil’s Peak as the fire raged out of control. The fire spread down the slopes of the mountain and threatened the suburbs of Rondebosch and Newlands, and down the central suburbs of Vredehoek, Walmer Estate and Woodstock.

Strong winds pushed the fire around the mountain onto Table Mountain and down towards the city centre. Within three days, the fire burned down nearly 650 hectares around the mountain. By Monday, winds approaching 50 kilometres per hour had pushed the fire toward densely populated areas above downtown Cape Town, forcing the evacuation of residents living along some edges of the park.

By Tuesday night, about 90 percent of the fire has been contained. Firefighting helicopters dropped water on areas where the fire smouldered and smoked on Table Mountain's rocky peaks. Army helicopters from South Africa had joined the mission to assist the fire service.

The Table Mountain aerial cableway and the nearby Kirstenbosch National Botanical Garden were both temporarily closed to the public. For the majority of the day, a dense plume of smoke billowed from the edge of Devil's Peak toward the summit of the mountain above the capital, engulfing office buildings and the Cape Town port in a choking white cloud.

More than 200 firefighters and emergency personnel battled the blaze, while four helicopters and a spotter aircraft that assisted on Sunday were grounded on Monday because of gale-force winds. At least five firefighters sustained injuries.

These firefighters were heroically fighting against the fire that threatened property worth hundreds of millions of rands. At the same time, some of these firefighters are not directly employed by the government but are working through the Expanded Public Works Programme, “Working on Fire”: a privatisation scheme in which essential services are outsourced to private contractors. These workers do not have stable job security and are receiving 11.40 rand per hour, which is below minimum wage. At the same time, they are being pitted against municipal firefighters by the government in order to drive down the cost of all workers in the Department of Environmental Affairs.

Shockingly, many of the firefighters who were risking their lives to fight this devastating fire are now in danger of being fired, because of an ongoing dispute over their shifts. According to the South African Municipal Worker's Union (Samwu), 525 firefighters could be fired for embarking on a strike in 2019.

Samwu said the firefighters’ strike was to strengthen a demand for eight-hour shifts instead of 24-hour call shifts. The union said 24-hour call shifts are exhausting, and more people could be employed if the shifts were shortened, but the city refused and instead took the firefighters to the Labour Court, which declared the strike unlawful. Obviously, longer and more-tiring shifts also put emergency response workers in greater danger.

Not a ‘natural’ disaster

Wildfires are common in the national park lands that make up the heart of Cape Town but there is nothing ‘natural’ about this disaster. It was a disaster waiting to happen because of the criminal negligence of the DA government and the capitalist system they uphold. For example, over the last financial year, the city made cuts of nearly 1.3 billion rand, including to its Fire and Rescue Services department. 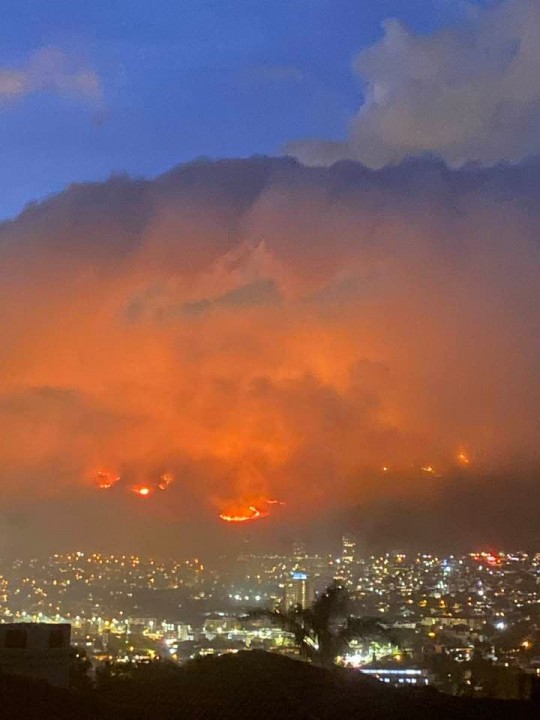 The Cape Town fires were an accident waiting to happen / Image: own work

Negligence and mismanagement by the park’s authorities were also a factor. One reason the fire spread so rapidly is because the slopes of Devil's Peak are littered with detritus from alien species, such as pine trunks and the husks of eucalyptus leaves. This flora was introduced because it looks attractive, but it cannot easily survive in the local conditions, and the uncleared remnants were tinder dry. If you combine this with the current hot and dry conditions, a single spark was all that was needed to set the whole thing off.

Social rot and poverty also contributed to this calamity. According to the National Parks agency, one of the fires may have been started by vagrants cooking on the mountain. Destitute people live on the mountain because they have nowhere else to go. Some need shelter or work, while others need social services or psychiatric care. Some people are homeless because they suffer from conditions that need either acute or long term care, and perhaps permanent accommodation in care homes.

Homelessness is a result of a wide range of issues that flow from the crisis of capitalism such as overly expensive accommodation, unemployment, mental health issues, addiction, and lack of education, skills, and adequate healthcare. Instead of providing these, the city council, which is governed by the Democratic Alliance, a bourgeois party, has for years introduced policies and measures to drive poor and homeless people out of the central part of the city. Having no alternative accommodation, it is no surprise that many of these people ended up in the mountains and started fires to cook and keep themselves warm.

At the same time, cuts of 32 million rand were made to the Informal Settlements Upgrading Partnership Grant, a programme meant to provide low-income housing. The result is that many poor and homeless people moved to all kinds of different places looking for somewhere to live, including the slopes of the mountain.

Finally, the exceptionally hot and dry conditions were brought on by the escalating global climate crisis, which is a consequence of rapacious and irresponsible capitalist production for profit, without any regard for the welfare of the planet. This has made freak weather events more frequent and severe in the last few years.

In these conditions, sooner or later, a live ember was bound to be picked up by the wind, or someone would fail to extinguish a cooking fire. If you combine this with the kindling all over the slopes of the mountain, the result was entirely predictable. The blame for this tragedy should therefore be placed squarely on the shoulders of the DA government of the city, and the world capitalist system in general.

It is often said that Cape Town is two cities — one for the rich and one for the poor. That is correct. The DA is clearly a party for the wealthy. Although the rich suburbs in Cape Town receive world-class services, the same cannot be said for poor communities. Apartheid ended formally in the early 1990s, but Cape Town remains a largely segregated city, and many low-income black and brown South Africans live in townships a significant distance from the city centre, and are forced to travel long distances to get to work.

While private developers buy and sell valuable properties in the city centre, black and brown people are being evicted and forced into low-quality housing on the city's outskirts. Once people are evicted from their gentrifying neighbourhoods in Cape Town, they have few options.

More than 36 percent of the city’s households earn less than 3,500 rand ($244.97 USD) a month. More than 30 percent of black African people are unemployed, compared to less than 6 percent of whites. Another problem is the crisis of housing. More than 51 percent of applicants for houses in the city live in shacks, 31 percent live in backyards and 12 percent share a house with other people, while 63 percent are unemployed. Yet, most of South Africa’s richest people live in Cape Town, with its splendid beaches and wine-growing estates.

This inequality was again shown in this fire. When the rich suburbs were in danger, the city pulled out all the stops to save private property, including flying helicopters at a cost of 36,000 rand per hour. But fires are not uncommon in Cape Town. In recent years, several poor, working-class communities have been devastated by preventable fires.

In fact, areas such as Khayelitsha and Masiphumelele are far more prone to fires than anywhere else in the city. Cramped living conditions, high population density, no access to basic needs like safe electricity connections and running water, and lack of decent affordable housing for the working class are all factors that determine the extent of the spread of household fires.

The DA continues to criminalise homelessness whilst pushing policies that exacerbate the crisis. It is the government’s criminal neglect of the poorest of the poor in our society that forces the homeless into dangerous situations.

Climate change, the ongoing pandemic, the economic fallout, the unemployment crisis, and so on are all pressures borne by the working class and the poor, and they are all directly linked to the capitalist system. More than ever, workers, youth and popular communities must band together to confront the world's crises. The only way to do this is through a socialist agenda that fights for a total transformation of society, based on people's needs rather than the profits of the wealthy.